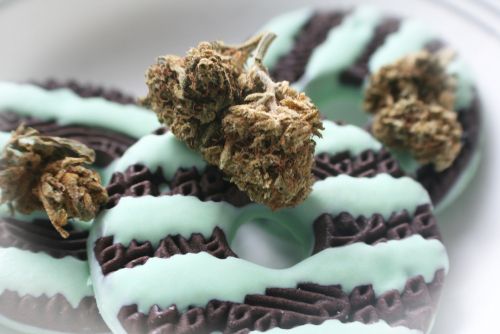 Are Marijuana Edibles Sold in Dispensaries?

The law also has specific laws governing the processing of medical marijuana. This includes the making of any edibles or concentrates, both of which require a specific license to be completely legal [2]. So, buying edibles from a dispensary is technically the only legal way to obtain them.

What are Edibles and Why do People Want Them?

Edibles are one of the most widely advertised forms of marijuana, but some people may not be entirely sure of what edibles exactly, especially with restaurants offering marijuana-infused drinks and dishes in increasing numbers across the country. In our case, though, we will focus on the kinds of edibles you can buy at a dispensary, which likely won’t include a cannabis caprese.

The most common edibles you will find at your local dispensary will likely be smaller, sweeter food items or drinks that contain cannabis flower or concentrates. This can include brownies, coffee drinks, chocolate bars, cookies, and so on. In Ohio, these products will include highly detailed information regarding nutrition and chemical content, which you should pay close attention to, as it will show you how much CBD and THC have been infused.

Edibles are very useful for some people and may be a better or more accessible choice depending on the individual. For example, someone with respiratory issues may not be able to safely inhale vaporized marijuana or found it to be ineffective in helping relieve their symptoms. Sometimes, it may just come down to personal preference, with some users disliking the taste or sensation of tinctures and other concentrates.

On the other hand, edibles are handled by your body in a very different way than other marijuana products. When edibles are eaten, they are subjected to the mechanical and chemical forces in the body’s digestive system, which can change the cannabinoids in profound ways, and may lower the concentration of some cannabinoids by a large amount. This is known as the first pass effects, or first pass metabolism, and it is incredibly important in medical science. When a chemical is swallowed, it is absorbed through the digestive system and then passes through the liver, which houses many metabolically-important enzymes [3]. First pass metabolism has been found to lower the bioavailability of both CBD and THC, leading to researchers trying to find new ways to increase the solubility of the chemicals, allowing them to more easily be absorbed into the blood [4].

While this may sound like a bad thing, it may actually be edible’s biggest strength. By going through the digestive system, edibles may take longer than other forms of marijuana to have their effects be felt and may result in slightly different effects at that. It has been found that THC is mainly metabolized in the liver, where it is changed to 11‐hydroxy‐THC and 11‐carboxy‐THC, the first have which has been found to be psychoactive and may explain the anecdotal evidence of edibles producing a different effect compared to similarly dosed plant material [5].

Another, often overlooked, aspect of edibles is dosing. Knowing the amount of the edible that constitutes one “dose” of an edible can be confusing for a first-time user. Some products, like cookies and brownies, will likely be a single serving, meaning that the amount of cannabinoids listed in the information panel will be that of the entire product. In other cases, like chocolate bars and honey, a dose will more likely be a part of the whole product and will require more care to get the anticipated effects and not over-do it.

Edibles are more than likely available at your local dispensary and are fully legalized in Ohio. They are very easy, and even enjoyable, to consume and may offer a different way to get the beneficial effects of medical marijuana. Because of the edibles being subjected to the body’s digestive and metabolic systems, the cannabinoids may be changed dramatically, resulting in a longer onset of and slightly altered effects. Complete our easy, online eligibility survey today to find out if you may be eligible for an Ohio medical marijuana card!