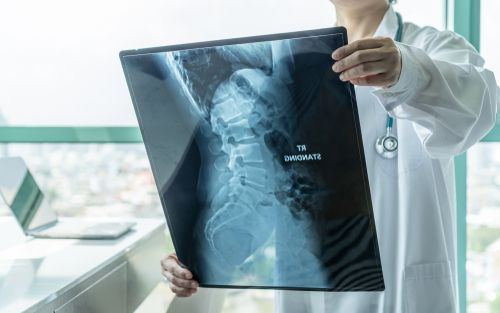 As some of you may already know, August is Spinal Muscular Atrophy Awareness Month. So, we here at DocMJ would like to help bring some recognition to the disease, discuss how it can affect the lives of those diagnosed with it, and offer some guidance to those who are considering medical marijuana as a form of treatment.

If you, or someone close to you, is looking for affordable Ohio medical marijuana recommendations, our team is here for you! We can easily be reached on our website where we offer a simple eligibility survey which can tell you if you pre-qualify for a recommendation instantly!

What is Spinal Muscular Atrophy?

Spinal Muscular Atrophy (SMA) is a disease that affects a person’s motor neurons, the cells of the body that are responsible for relaying signals from the brain to the muscles. In those with SMA, a change in a specific gene, the SMN1 gene, eventually results in the death of those motor neurons. This has huge implications down the line. Over time, a person with SMN may experience muscle twitching, muscle wasting, problems swallowing, respiratory issues, and other problems. It is estimated that about one in fifty-four people are carriers of the mutated gene with an overall incidence rate of one in eleven thousand [1].

SMA is not the same for all that are diagnosed, and has been broken down into four types based on the age of onset and the individual’s degree of motor function. Type one SMA is the most severe type of SMA and may also be called Werdnig-Hoffmann Disease. It has an extremely early onset, usually being diagnosed at birth or shortly after. The children with type one SMA will often have a hard time moving, holding their head up, or even breathing and swallowing. This type of SMA also progresses rapidly, with most infants being unable to sit on their own and many not making it to age two.

Type two SMA, also known as Dubowitz disease, usually manifests in infants between six and eighteen months old. Unlike those with type one SMA, infants with type two may be able to sit up, but will not be able to walk without assistance. Depending on the severity of the disease, life expectancy can have a wide range, along with the rate of progression. This type of SMA also seems to affect the legs more so than the arms of most individuals.

Type three SMA is usually diagnosed in individuals between twelve months old and early adulthood. Because of this age gap it is generally known as juvenile SMA and describes those who can stand and walk, but require assistance standing from a sitting position. People with type three SMA may have muscle weakness and an increased risk of respiratory infections, but will usually have the life expectancy of someone without SMA.

Type four SMA is adult onset SMA. Adults with type four SMA may experience muscle weakness in their twenties or thirties. Later on, they may require the use of aides, but complications are rare and life expectancy in normal.

There is a fifth type of SMA known as SMA type zero, or prenatal SMA. This type of SMA is characterized by a decrease in fetal movement during pregnancy. Babies with SMA type zero are usually born with severe weakness, a lack of reaction to stimuli, and severe heart defects. Unfortunately, those with SMA type zero have a short life expectancy, usually between one and six months.

To begin, direct research on the effect of marijuana on bodies with SMA is lacking. However, overall research on both SMA and marijuana is increasing quickly, so this will likely not be the case for much longer, and the strides researchers and medical workers have made in both spheres are very exciting.

As we have seen previously, marijuana has a large effect on the body. It can change how we perceive our surroundings, process information, our emotional state, and so on. Many people have great success using medical marijuana in tandem with traditional pharmacological medicines as well, further increasing the number of uses for the drug.

Regarding SMA specifically, marijuana may be able to help those who are having trouble combating certain symptoms common in diagnosed patients. For example, increased feelings of pain are a common occurrence in those with SMA, especially if they have been diagnosed at an early age, with nearly fifty percent of adolescents reporting chronic pain according to one study [2]. In this case, medical marijuana has been found to likely have high-quality evidence backing its use as a way of helping users deal with chronic pain [3]. Chronic pain is the number one reason for medical marijuana use in the United States, and, while the science is still in its infancy, both the research and anecdotal evidence are promising.

Another common problem in those with SMA is a lack of appetite. This may be due to a prescription taken by the individual or a result of another symptom. This may lead to malnutrition in some people. Again, for those in this situation, marijuana may be able to help increase their appetite and get them eating the necessary amount of food for their body. Previous research has found a link between the endocannabinoid system (the system which the chemicals in marijuana act on) and food intake [4], showing that activation of the cannabinoid receptors can cause an increase in food consumption and higher overall appetite.

Furthermore, those with SMA also experience other secondary problems due to SMA, such as anxiety, depression, and lack of sleep. Many of these may also be helped by medical marijuana, as it has been found to generally increase mood and decrease anxiety in many users.

Some Things to Keep in Mind for Those With SMA

Some of the most common symptoms of SMA, especially for those with type one, two, or three, are difficulty breathing and increased risk of respiratory infection. Because of this, it is crucial to carefully weigh the pros and cons of not only the kind of marijuana you may ingest, but the way in which you will ingest it. For example, while smoking via combustion of marijuana is illegal in Ohio, full flower buds are still available for purchase and may be inhaled by vaping. The result of this method may be different than if the marijuana had been ingested in an edible form, even if their chemical makeups were identical. The health and safety of those who use medical marijuana is extremely important, and it is critical to speak openly with a doctor about any questions and worries you may have.