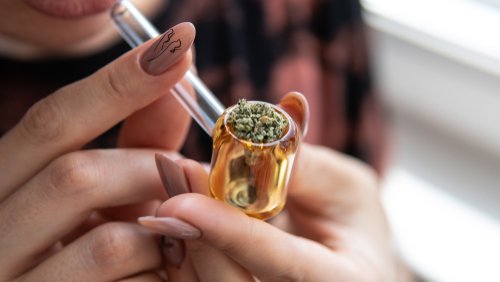 When the legislature for medical marijuana in Florida was passed in 2016, it did not include the smokable form of cannabis. Qualified patients could legally purchase products such as vape cartridges, shatter, RSO, sublingual oils, and suppositories – but no smokable flower was allowed. Safest Way to Smoke Cannabis Flower

A part of the reasoning behind this was the concern over the safety of inhaling combusted cannabis.

The Safety of Combusting Cannabis

While smoking marijuana is the most well-known consumption method, it is one of the most harmful ways of consuming cannabis. Smoke is harmful to a persons lung health, whether from burning wood, tobacco, or cannabis because there are carcinogens and toxins released from the combusted material. Marijuana smoke has been shown to contain some of the same irritants and toxins as tobacco does.

Beyond what is in the smoke alone, cannabis is typically smoked differently than tobacco. Cannabis users tend to inhale the smoke more deeply into their lungs, and they hold in their breath longer, which leads to greater exposure to tar per breath. Regular marijuana smoking causes microscopic injury to the airways and can increase the risk of chronic bronchitis symptoms, but this subsides if the smoking stops.

Smoking cannabis can cause chronic bronchitis, and marijuana smoke has been shown to injure the large airways’ cell linings, which could explain why smoking marijuana leads to symptoms such as chronic cough, wheezing, phlegm production, and acute bronchitis. Smoking cannabis has also been associated with cases of air pockets developing in between both lungs and between the chest wall and the lungs. It has also been linked to large air bubbles in the lungs among young to middle-aged adults, mostly heavy smokers of marijuana. However, it is impossible to know for certain whether these occur more frequently amongst marijuana smokers than the general population.

Smoking cannabis can also affect the immune system and the body’s natural ability to fight disease. This is especially true for those whose immune systems are already weakened from immunosuppressive drugs or diseases like HIV infection.

Smoking cannabis harms the lungs’ first line of defense against infection by suppressing cells that help remove dust and germs and cause more mucus to form. It also suppresses the function of immune system.

These effects could lead to an increased risk of lower respiratory tract infections among cannabis smokers. However, there is no clear evidence of such actual diseases being more common among marijuana smokers. Yet frequent marijuana-only smokers have more healthcare visits for respiratory conditions compared to nonsmokers.

Studies have shown that smoking marijuana may increase the risk of opportunistic infections among those who are HIV positive. However, it does not seem to affect the development of AIDS or lower white cell counts.

Another potential threat to those with weakened immune systems is Aspergillus, a mold that can cause lung disorders. It can grow on marijuana, which, if smoked, exposes the lungs to this fungus.4 However, it rarely causes problems in people with healthy immune systems.

Glass pipes, also known as bowls, are a great way to start smoking cannabis. There is a wide variety of pipes to choose from, like small one-hitters to big artistic looking bowls. These pieces are great for individual use but can also easily be re-lit and passed around. Some downsides to smoking out of glass pipes are the cost to purchase one, the ability to break them easily, and the harshness of not having anything to filter the toxins or the harshness of the smoke.

Bongs are similar to a glass pipe but have several added features to enhance the smoking experience. They have a chamber to hold water that cools down the smoke as it passes through, making the hit of smoke less harsh and more comfortable to inhale. Some bongs even come with additional percolators that filter the smoke even more for a better experience.

Cannabis-naive users, please keep in mind that bongs will produce more smoke than a bowl will, making it easier to misdose yourself, resulting in an experience less than ideal.

Rolling up a joint is a great way to smoke cannabis. They can be rolled as small or as large as needed and will make the flowers true taste peak through. This option is excellent for smoking outdoors as the smell of the smoke will linger in the air.

Blunts are a type of cigar wrap that can be used to roll up cannabis flower. It is similar to a joint, except the papers are more harmful and cause a thicker smoke. The effects produced by a blunt will be different than from a joint or bong because you are mixing the cannabis effects with the effects produced by the tobacco wrap. This is one of the most harmful ways of smoking cannabis because of the other tars and chemicals found in the blunt wraps.

Vaping is a Healthy Smoking Alternative

One healthy way of inhaling whole cannabis flowers is by using a vaporizing device. These come in all shapes, sizes, and prices to meet the needs of each user. Vaporizing cannabis removes approximately 95 percent of the smoke that is inhaled.

A vaporizer steadily heats herbs to a temperature that is high enough to extract THC, CBD, and the other cannabinoids and terpenes present in the plant. The temperatures are too low for the potentially harmful toxins released during combustion, minimizing the health risks associated with smoking. It has also been suggested that it can increase the yield of anti-inflammatory terpenoids that protect the lungs from irritation.

Another great thing about vaping whole flower is the ability to reuse the already vaped product. Since the material is not getting burned, it gets saved rather than turning to ash. The leftover flower is decarboxylated and perfect to use for infusions once it has been washed.

If you would still rather smoke whole flower despite the risks that come along with it, consider these tips to help make it a little less harmful:

There is really no safe way to inhale cannabis, but the good news is there are plenty of other ways to consume it.

These are your main options:

If you think medical marijuana products will provide the relief you are looking for and you are a resident of Florida, take this eligibility survey.  Conditions like Post Traumatic Stress Disorder, Chronic Pain, Cancer, and Epilepsy are a few of the state approved chronic conditions that make a person eligible for their medical cannabis recommendation.

Once you book an appointment with a Florida Medical Marijuana Physician and are approved, you can apply for your card through the states Medical Marijuana Use Registry. Once the state issues you an identification card, you can legally purchase cannabis products in Florida.