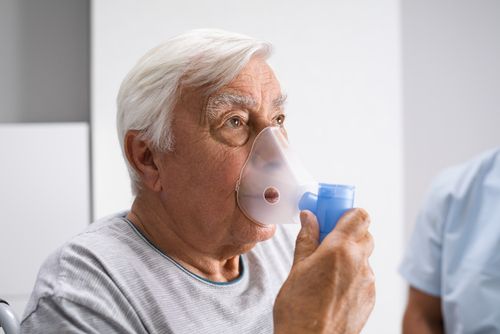 COPD stands for chronic obstructive pulmonary disease and is estimated to affect millions of Americans. Its severity can depend on the individual and the type of COPD the person has. Because of how common it is, and it’s often debilitating symptoms, many people with COPD work hard to manage their condition however they can, and some have turned to medical marijuana.

If you have questions about becoming a legal Ohio medical marijuana patient, the DocMJ team is here to help. Find out if you pre-qualify for an Ohio medical marijuana recommendation instantly by completing our online eligibility survey. If you’d like to speak with one of our Patient Care Coordinators please call (877) 899.3626.

COPD is actually a group of diseases of the lungs that make breathing very difficult. Essentially, when a person breathes, their lungs expand to hold all of the incoming air, similar to how a balloon will stretch when it is inflated. When a person breathes out, the lungs deflate, and the process starts over again. The biggest secret to the lungs are very small sacs called alveoli, which are also the points where the gas exchange of oxygen and carbon dioxide take place. When we inhale, these alveoli expand to nearly double their diameter, and greatly increase the surface area of the lung, allowing as much oxygen to enter our bodies as possible.

In people with COPD, this process doesn’t happen as well as it should, and it may be due to several reasons. The alveoli and airways in the lung may lose their elasticity, the airways may become inflamed, mucus production in the lung may increase and cause clogs in the airways, and the alveoli themselves may be destroyed. When the alveoli are damaged, it is known as emphysema, and the chronic inflammation of the airways, which may also cause excess mucus production, is called chronic bronchitis. These problems mean that less air can move in and out of the lungs, causing coughing, shortness of breath, tightness in the chest. Unfortunately, COPD is also known as a progressive disease, meaning it will worsen over time and may eventually cause everyday activities to become difficult or unmanageable.

The most common causes of COPD are environmental and related to exposure to irritants, such as fires or smoking. Very rarely, COPD may be caused by a genetic deficiency, and family history is a risk factor. There is no cure for COPD, and treatments can only help manage symptoms. Certain medicines can help airways expand and relax, antibiotics help reduce the heightened risk of infection, and oxygen therapy helps fight chronic hypoxia. Due to the sometimes difficult-to-administer therapies and medicines, many people have started looking elsewhere, including to medical marijuana for help.

At first thought, medical marijuana benefiting people with COPD may sound far fetched. If we look at some of the effects marijuana has on our bodies, however, we can find a good deal of overlap. For example, for those experiencing the chronic inflammation side of COPD, CBD may be a great addition to their already established therapies.

It has been found that CBD has extensive anti-inflammatory properties, expanding even to helping reduce many different kinds of inflammation with varying causes [1]. Add to this the analgesic effects of marijuana [2], and it starts to become clearer as to why some people are making the switch. In fact, marijuana was found to cause short-term dilation of bronchioles, the big airways that lead to alveolar sacs [3]. The same study found that forced expiratory volume, the amount of air we can force out of lungs after a deep breath, increased by nearly a quarter of a liter in some users. Medical marijuana may also help fight the secondary effects of COPD, including anxiety and depression.

Of course, the elephant in the room is the perceived “normal” way to ingest marijuana, smoking. Luckily in Ohio, smoking marijuana is strictly prohibited, leaving vaping to be the only option for medicinal users. Vaping however, likely still isn’t the best option for people with COPD, as small amounts of irritants and even the action of taking a deep breath can cause a flare-up, so other methods of application are highly recommended. Edibles, for example, can give long-lasting benefits while being discrete, and tinctures can give quick relief when needed. Adding tinctures to teas or other drinks can combine the benefits of both and make taking the medicine something to look forward to, rather than a chore.

This is not to say that everyone with COPD should immediately start using any and all medical marijuana they can get, however, as there are many factors to consider before using it. The severity of the condition, along with the lifestyle of the user and their current drug plan all must be taken into consideration before using medical marijuana, and speaking with a certified physician before making any changes to an already established treatment plan is crucial.

COPD is a common disease that causes difficulty breathing. It is a progressive disease, meaning it gets worse over time and there is no currently known cure. Certain medicines and therapies can help keep symptoms in check, but some people may benefit from using certain forms of medical marijuana in conjunction with their current treatment plan. Medical marijuana may help fight chronic inflammation and pain, and raise the mood of the person using it. If you, or someone you know, has COPD, or is considering medical marijuana, DocMJ is here to make the process of obtaining an Ohio medical marijuana card simple and stress-free. Contact us today!