Can CBD Use During Pregnancy Cause Complications? 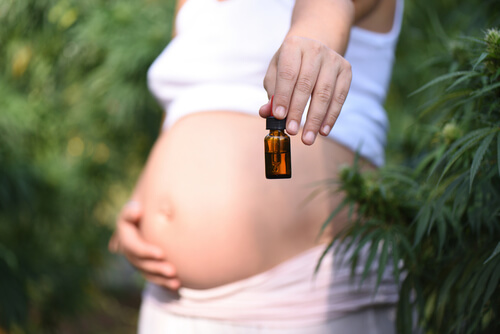 Being and becoming pregnant can be scary for people. There are so many half truths and rumors about what is good, what’s bad, and what you can and can’t do that it can be overwhelming trying to ensure your baby is happy and healthy. Add that to the evolving landscape of medical marijuana and you get a lot of people with a lot of important questions. So, what does science say? If you are looking into medical marijuana and have any other questions, want to find out if you might qualify for a recommendation, or want to find an affordable medical marijuana recommendation nearby, DocMJ can help! Our website offers a quick search of certified doctors, a quick and easy pre-qualification exam, and numerous informative blogs!

The Complexity of Pregnancy

It may seem obvious, but the biological complexity of pregnancy is hard to overstate. The timing and intensity of hormonal cycles, mixed in with all of the potential complications is truly incredible. To begin to break it down, after conception, conception can be broadly divided into three trimesters.

In the first trimester, the baby begins to develop their body structure and organs. It begins with rapid cell proliferation and the formation of the three main germ layers: the ectoderm, mesoderm, and endoderm. Cells in the ectoderm will go on to form the skin and spinal tissues, cells from the mesoderm will form the muscles and connective tissue, and cells from the endoderm will form the intestines and lungs. During this time, the pregnant woman will likely experience a variety of symptoms, including morning sickness and fatigue.

In the second trimester, often called the honeymoon trimester, the woman may start to feel her body really start to change. As the baby continues to develop, hormones and other chemicals can cause surprising physical changes. Dark spots may start to appear on the woman’s skin and circulation issues can become more common.

In the third trimester, the baby’s body is largely formed and physical symptoms of pregnancy, like back aches and heartburn become more common. As the baby migrates lower, frequent urination becomes more common, as do Braxton Hicks contractions. During childbirth, hormone levels change rapidly to help the mother endure the physical and mental load required.

What Can CBD Do?

Many of you reading this are probably already aware of the benefits of CBD, but it is important to consider that the body of a woman while pregnant is significantly different than it is while not pregnant. There are also many other considerations regarding the health of the child that must be taken into account, including the amount of time CBD stays in the body, whether it can make its way into the breastmilk if the woman is breastfeeding, and if it is able to cross into the placenta.

There are few studies directly on the effects and outcomes of CBD in the body of a pregnant woman. This is due to both ethical issues and the recency of acceptance of cannabinoid research in the scientific world overall, but it is possible to draw some tentative conclusions from what is available.

During development, the neural development of the child is very complex, and it has been found that the endocannabinoid system may play a role in the differentiation and diversification of both neural and glial (cells that support our neurons) cells. Both CB1 and CB2 receptors are expressed, and it seems that both may help cause cell differentiation into neural and glial cells separately [1]. This is important, because the presence of any chemicals that can activate these receptors can therefore cause changes down the line, including cannabinoids. In animal models it was found that the presence of cannabinoids did cause impairment of certain classes of neurons, but not others, tying into the earlier findings that certain receptors may help modulate differentiation separately [2]. It was also found that high levels of CBD in pregnant test animals caused lower levels of sperm cells in male offspring [3].

In the mother’s body, the form of marijuana consumed may also play an important role. Different forms of marijuana have different bioavailability levels and end products, meaning that the effects of a pregnant mother consuming edibles may be different than a pregnant mother vaping plant matter. That said, cannabinoids are able to be absorbed into breast milk and are able to pass the placental barrier, which correlates with previous findings. Cannabinoids have also been found to have effects on hormone levels and cycles in women, though it is still unknown to what extent [4].

Can CBD Use During Pregnancy Cause Complications?

Yes, it is not recommended to use CBD if you are pregnant or breastfeeding. If you become pregnant while using medical marijuana products, it is important to speak with your doctor about it and what to do. This is due to the effects of marijuana on the developing child and possible effects on the body of the mother. If you have any other questions about medical marijuana, DocMJ can help find a certified physician near you! We offer online bookings through our website and a super fast survey to find out if you pre-qualify for a recommendation!

[4] The pharmacokinetics and the pharmacodynamics of cannabinoids