Can I Smoke Legal Marijuana While Pregnant?

Florida women who are pregnant are increasingly using marijuana to help treat their morning sickness among other pregnancy-related problems or pre-existing conditions. Although evidence is limited, there are concerns regarding the effects of marijuana, such as low birth weight and other health-related issues. Although using marijuana while you’re pregnant is not illegal in states that have made it legal for medical purposes, such as Florida, mothers are curtailing their usage of the drug because they fear they will harm their baby or be reported to Child Protective Services for child abuse.

If you’re considering or are using marijuana during your pregnancy, please tell your doctor about any changes in your medical situation.

Prevalence of Estimated Marijuana Use During Pregnancy

Several studies have attempted to determine how many women use marijuana while pregnant, and the results vary. According to the American College of Obstetricians and Gynecologists (ACOG), marijuana has been found to be the most common drug used during pregnancy with two to five percent of pregnant women using it.

Further, its use seems to be more prevalent in particular groups of women. For instance, there are higher rates of marijuana use reaching up to 28 percent in urban women who are young and socioeconomically disadvantaged.
Results from the National Survey on Drug Use and Health (NSDUH) on more than 200,000 women 18 through 2014 years old from 2002 through 2014 revealed that 3.9 percent of expectant women claimed that they used marijuana in the past month.

This number is up from 2002, where it was 2.4 percent. Younger mothers-to-be were especially likely to use the drug and around 7.5 percent of young mothers-to-be who were between the ages of 18 to 25 years old and two percent of moms-to-be ages 26 to 44 years old said they had used cannabis in the past month according to a 2014 survey.

Regardless of the exact usage, as a growing number of states legalize marijuana for recreational and medicinal purposes, the use of cannabis by pregnant women in Florida and throughout the U.S. could increase even further.

Legality of Smoking Marijuana While Pregnant

Florida’s Amendment 2 states that a vast scope of diagnosable health conditions would qualify for a medical marijuana recommendation. While medical marijuana may be legal in Florida for people who need it, if you’re a woman who wishes to become pregnant and is already using it for medical reasons, are already pregnant or are breastfeeding, the American College of Obstetricians and Gynecologists (ACOG) discourages your marijuana use. Also, if you’re pregnant and smoking marijuana, it is possible that you could be reported to the Florida’s Department of Children and Families (DCF).

Regulating marijuana use during pregnancy can be difficult. The ACOG states that there aren’t any:

Because of these reasons, if you’re trying to get pregnant or already are, you’re typically advised not to use marijuana. And, as mentioned above, you could face Child Protective Services intervention.

As an example, one 35-year old woman stopped using marijuana not because she was concerned about harming her fetus, but because she was worried about Child Protective Services becoming involved. Even after she stopped using the drug, Child Protective Services received her marijuana usage medical records despite the fact that when she gave birth, she tested negative for THC.

Medical marijuana may help with some common health issues in pregnancy, such as:

If your morning sickness is so severe that you’re unable to keep your food down and regain your appetite, you may add a little cannabis-infused oil into your cup of tea.

Pregnant women may smoke marijuana if they had a medical condition before they became pregnant, and they were using medical cannabis to help treat their ailments. Examples of such conditions include:

Occasional cannabis use has been recommended by some midwives to decrease anxiety and treat morning sickness during pregnancy. The thought is that staying stress-free and eating healthy foods is important for a healthy pregnancy. However, marijuana’s active drug tetrahydrocannabinol (THC) changes some adult body processes from brain function to the heart rate. Therefore, there could be effects on the fetus as well.

Researchers don’t know THC’s exact effects on a growing baby. Studies on marijuana are questionable because most rely on questionnaires. If pregnant women are concerned with the anonymity of their answers, they may deny smoking marijuana.

Furthermore, researchers have also noted repeatedly that many women they studied who smoked marijuana while they were pregnant also smoked cigarettes. Any adverse effects on their children might be related to their smoking cigarettes and not their use of marijuana, so it complicates the statistics. No level of tobacco — or alcohol — is considered safe for pregnant women or women who are breastfeeding, and the same may be true for marijuana use. 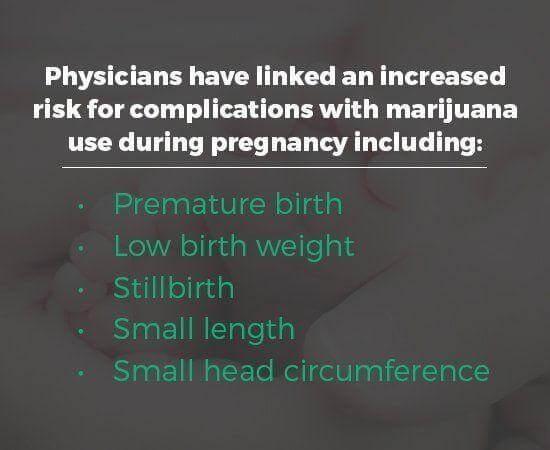 Medical physicians have linked an increased risk for complications and stunted fetal growth in pregnancy with marijuana use during pregnancy including:

Not all newborns born to mothers who used marijuana while pregnant have congenital disabilities, but reports indicate that it increases your baby’s risk of those complications.

Effects of Marijuana on the Fetus

While there may be some pregnant women who assume that marijuana doesn’t affect their developing babies, there is preliminary research that says it does. The THC in cannabis is said by experts to cross the placenta and reach the fetus, which can potentially harm birth weight, cognition and brain development. It can also end up in your breast milk.

Again, there is no real strong evidence of marijuana causes harm during pregnancy, but along with low birth weights, babies born to mothers who used the drug while they were pregnant might have an increased risk of becoming anemic and suffering from other health issues that require intensive care. The Centers for Disease Control and Prevention (CDC) express concern over attention and memory problems when a fetus in utero is exposed to THC.

Six-year-old children whose mothers used marijuana on a daily basis during their first trimester had difficulty understanding concepts in reading and listening. Ten-year-old children who were exposed to the drug while in utero had difficulty focusing their attention and were more impulsive than other kids. Children whose moms heavily used marijuana during their first trimester had lower scores in math, reading and spelling than other kids.

Numerous studies have found brain changes in 18- to 22-week old fetuses linked to their mother’s cannabis use. Researchers have noted that exposed male fetuses showed the abnormal function of the amygdala, which is the area of your brain where emotion is regulated.

According to the neuroscientist, Dr. Yasmin Hurd, marijuana is changing important neurotransmitter receptors and circuits even early in the developmental stage. These receptors are essential for regulating your reward and emotions, cognition and motor function. Although it’s unclear how marijuana may lead to these issues, it may be interfering with nerve cell and circuit formation in the brain during the fetus’ developmental stage. Laws that legalize medical marijuana don’t list conditions related to pregnancy among the allowed uses. They don’t outlaw that use, and they don’t warn against potential harm to fetuses.

Overview of Studies on the Effects of Marijuana on Pregnancy/Fetus

Studies on the effects of marijuana on pregnancy and the fetus aren’t robust, but below are some of what’s available.

Twenty-four studies regarding the maternal use of marijuana were reviewed and found that using cannabis while pregnant can result in a 77 percent chance of the baby being born underweight. Another study of 12,069 women found that the women who used marijuana in addition to smoking cigarettes while they were pregnant had a higher chance of having babies with low birth weight and smaller heads than women who only smoked cigarettes.

In another study, female rats received marijuana smoke or placebo smoke throughout their gestation. A couple of months before mating, the offspring received injections of THC. The female and male offspring of the study rats had smaller reproductive organs and were substantially less fertile. The experimental F2 generation was slower in certain areas of physiological development and weighed less than the F2 control rats. Marijuana smoke exposure as a fetus and as a young adult showed a more significant effect on fertility than the THC injections two months before mating.

In a 2014 study, researchers reviewed over 20,000 birth records in the United States. The records ranged from 1997 through 2005. The study found that babies who were born to moms who used marijuana during pregnancy were at an increased risk of being born with anencephaly, a neural tube defect that causes severe brain malformation. The journal Psychopharmacology published research that found that pregnant rats still gave birth to offspring with tremors, learning delays and unusual emotional behavior even at low doses of cannabis.

Other studies showed that pregnancy is at a higher risk of complications with daily or weekly use of marijuana. For instance, a 2011 study with 25,000 women participants concluded that infants born to moms who used cannabis were at a doubled risk of being admitted in the neonatal intensive care unit (NICU) than were other infants.

Studies That Are Unclear

THC has been shown by some research to cross the placenta and enter the bloodstream of a fetus when a pregnant woman smokes or ingests marijuana. However, because administering drugs to women who are pregnant for experimental purposes is unethical, evaluation of possible embryo malformation factors is limited to epidemiological investigations or clinical observations. Even though clinical reports may alert healthcare providers and physicians of potential agents that are causing abnormal development, they’re typically hard to evaluate.

Further research is needed, but you should be aware of the possible risks that marijuana poses to your baby if you use it while you are pregnant or breastfeeding.

What This Means for You, the Pregnant Mother

Although studies on cannabis and the growing fetus are still minimal, choosing to use medical marijuana is a serious decision. You should talk with your doctor before you use marijuana during your pregnancy or while you’re breastfeeding.

Although roughly 50 percent of women marijuana users continue to use while pregnant, there is evidence that cannabis may hurt fetal neurodevelopment. The ACOG is asking OB-GYNs to urge their pregnant patients — and those contemplating becoming pregnant — to discontinue marijuana usage.

Is it okay to use marijuana while you are pregnant? You need to make the decision for yourself, and you should, like most decisions, weigh the benefits and the risks and consult with experts on the matter. The ACOG released a policy statement in 2015 urging women who are pregnant or breastfeeding to refrain from using marijuana.

The ACOG recommends the following:

You should receive regular check-ups by your physician even if you’re using marijuana while you’re pregnant. Don’t let your drug use cause you to skip your doctor appointments. Prenatal visits are important to your health and the health of your baby. Prenatal care is essential during pregnancy, and you should also be honest about your drug use to your physician.

If you’re considering smoking legal marijuana or already are while pregnant, talk with your gynecologist or doctor. Your doctor is not there to judge; they are there to ensure you and your infant stay healthy.

If you’re considering using medical cannabis in Florida, contact us here at DOCMJ to check your eligibility for a medical marijuana recommendation.