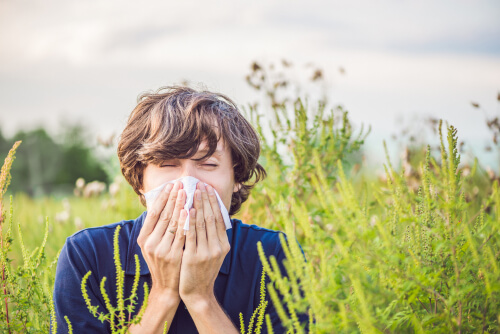 Seasonal allergies are the bane of many people’s existence. While some people are able to last all year long without the watery eyes caused by the local flora, the unfortunate truth is that many, many more are forced to use either pills, nasal spray, eye drops, or some combination of them to even function correctly. Even then, missing a day can send the weeks of built up protection against pollen spiraling back down and it’s back to runny noses for another night. There has to be a better way, and maybe there is. Marijuana may not be on the top of people’s lists for treating allergies, after all, it’s the plants that cause them, but it might be worth reconsidering if you are on the lookout for another hand in the fight against histamines. If you’re wondering whether or not you might qualify for an Ohio medical marijuana card, our online eligibility survey can let you know instantly if you pre-qualify. Click ‘Get Started’ at the top of our website to get started today!

Seasonal allergies, also commonly called hay fever and seasonal allergic rhinitis, are often caused by the blooming and subsequent release of pollen from plants. So, while the spring flowers may look beautiful, they are actually releasing millions of grains of pollen that make their way into your nose, mouth, eyes, and airways that then cause a chemical cascade and subsequent inflammatory response. While this may seem a bit extreme, it is actually just your body doing its job and trying to protect you. After all, if millions of viral particles or bacteria suddenly showed up in your body, a similar thing would happen, and an army of immune cells would immediately start working to mount an attack.

At the molecular level, the runny noses and teary eyes are caused by histamines, small organic compounds that play a central role in both inflammation and itching. In fact, if you’ve ever had hives, you can also thank histamines for that. They aren’t all bad, though, as they help white blood cells and other important things cross from the bloodstream into other tissues, allowing them to fight whatever foreign material has infected them.

To start, let’s consider some of the effects marijuana has on the body, specifically on the immune system and inflammation. CBD, one of the main cannabinoids produced by marijuana, has been shown to influence both. In the case of inflammation, CBD products like Doc-CBD can help reduce many kinds of inflammation, including both neural inflammation and chronic inflammation [2]. As far as the immune system, CBD has been found to act as an immunosuppressant, directly modulating the production of many different immune cells and even in the mechanism of inducing apoptosis, or programmed cell death [3]. Some immune cells carry chemicals that help the body fight off dangerous things, like viruses and bacteria. These chemicals can be things like lysozyme, heparin, and yes, histamine. The class of cells that carry these chemicals are called granulocytes, named for the distinctive “granules” of such chemicals that can be seen at high magnifications.

Another benefit of CBD is its anti-inflammatory properties. For some people with severe seasonal allergies, trouble breathing is an unfortunately common symptom, and can make simple tasks, like grocery shopping or basic yard work, very difficult. High concentrations of CBD can help counteract inflammation in airways to help you breathe easier.

It is worth noting that while CBD and medical marijuana can be very beneficial, it works best as a complement to standard allergy medications in most cases. For those with very mild seasonal allergies, marijuana may be able to help reduce the need for more traditional antihistamines, and for those with severe allergies that find themselves using multiple eye drops, pills, or nasal sprays, medical marijuana may be able to replace one or more  of these, or even give just a bit more help than before.

Seasonal allergies are a common and distracting occurrence for millions of Americans. Caused by the body overreacting to pollen, seasonal allergy symptoms include runny nose, sinus pressure, and trouble breathing in extreme cases. Marijuana has been found to have effects on the immune system, including the very cells that carry the chemical that causes these symptoms. Marijuana high in CBD can also help reduce inflammation caused by seasonal allergies. If you’re interested in obtaining an Ohio medical marijuana card, take our eligibility survey today to find out if you pre-qualify! Be sure to also check out Doc-CBD.com for physician recommended hemp-derived CBD gel capsules.

[2] A tale of two cannabinoids: the therapeutic rationale for combining tetrahydrocannabinol and cannabidiol