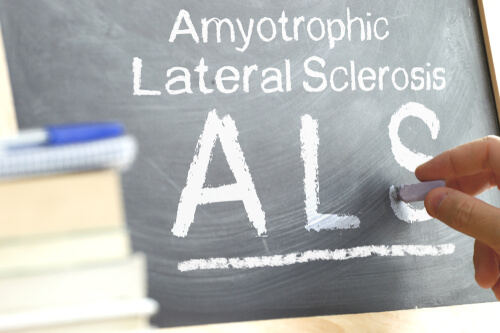 Amyotrophic lateral sclerosis (ALS) is a disease of the nervous system that is estimated to affect between fourteen and fifteen thousand Americans. Many people may know it by other names, such as Lou Gehrig’s disease or motor neurone disease. For people with ALS, many days can be a struggle, and any amount of help can make a big difference. Because of this, and the benefits that have been found by users with Parkinson’s and muscular dystrophy, many people have started considering medical marijuana as a potential therapeutic agent. If you are interested in becoming an Ohio medical marijuana patient, our team is here to help. You can speak with a DocMJ Patient Care Coordinator over the phone at (877) 899.3626 or by using the Live Chat feature on our website. You can find out instantly if you pre-qualify for a medical marijuana recommendation by completing our easy, online eligibility survey. Click here to take the survey now!

ALS is a progressive disease that targets the central nervous system. Being a progressive disease, it will get worse over time, eventually resulting in the loss of control over all voluntary muscles. This includes the muscles involved in eating, speaking, and even breathing.

ALS affects people of all races and backgrounds, making it very difficult to pinpoint probable causes. However, ALS generally affects older, non-Hispanic men more than other demographics. It is also recognized by the U.S. Department of Veterans Affairs as a service-connected disease and military service may increase the risk of its development.

There is a slight genetic component to the disease, however. It is estimated that up to about ten percent of ALS cases are inherited, and several mutated games have been found to correlate with this “familial ALS”. One of these genes was even recently discovered thanks to the fundraising done by the Ice Bucket Challenge.

Symptoms of ALS usually start in the limbs, with hand, arm, or leg weakness being the most common first sign. A person in the early stages of ALS might start to have difficulty doing certain daily activities, like buttoning a shirt, brushing their teeth, or feel more clumsy on their feet. As the disease progresses, this weakness will spread to the rest of the body, resulting in substantial atrophy, though the person’s mental state will not be changed. This often results in secondary problems, like anxiety and depression.

For now, there is no cure for ALS, only methods to control symptoms and maintain the person’s independence. This can include medications, physical therapy, and physical support for things like breathing and eating in the later stages of the disease.

How Medical Marijuana Can Help?

There has been an exciting amount of research done on marijuana and its effects on the body. Currently, though there are some studies that have found certain cannabinoids to have profound effects on the nervous system, leading to both physiological and behavioral changes. For example, both THC and CBD, the main cannabinoids in marijuana, were both found to have neuroprotective properties [1]. While this may not translate directly to a “cure” for ALS, it highlights the possibility of future therapies.

Other studies on the marijuana and ALS found that animals with the disease that were treated with THC actually experienced delayed progression [2], and that the previously discussed neuroprotective and anti-inflammatory properties may, again, have real clinical significance in the future, though this is still yet to be proven [3].  Compounding this, another study found that cannabinoids are a key part in both embryonic and adult hippocampal neurogenesis [4]. This finding in particular is very interesting, as neurogenesis of any kind in adults is still a contentious subject. The study put forward that the effect is largely reliant on the activation of CB1 cannabinoid receptors and that this activation also produced antidepressant-like effects.

The second part of that statement leads to another important use of medical marijuana, as a way to minimize discomfort in a way that is complementary to modern pharmaceuticals. In other words, the idea that a person can completely stop the use of “traditional” medications and move to a solely medical marijuana treatment regimen may be slightly misguided. For some people, it can work very well! For others, though, it may not provide the level of treatment that they have grown accustomed to.

So, in the complementary sense, medical marijuana can give a huge boost to a person’s quality of life. Not to mention, ALS is a qualifying condition in Ohio, so a diagnosis by a qualifying physician allows the patient access to the state’s program. Medical marijuana users with ALS have found that it can reduce their pain due to the condition, lift their mood, loosen tight muscles, and increase their appetite.

While these benefits may not seem as important as the neurological ones, it is important to consider a person’s entire self when considering a therapy. Someone who is experiencing depression and anxiety is less likely to stick to a rigid schedule of physical therapy and medication dosing, and, by fighting some of the secondary effects of ALS, they can get a better outlook on the future and stay independent for longer.

ALS is a neurological disease that eventually results in the complete shutdown of all voluntary muscles in the body. The first signs of ALS are generally in the peripheral limbs, but will continue to spread to other areas as time moves on. Medical marijuana research potentially offers a new tool and target for ALS therapies, and might help protect nerves in danger of destruction due to the disease. For now, medical marijuana likely works best as a complement to other medications and treatments. If you’d like to schedule an appointment with a certified Ohio medical marijuana doctor, please click the ‘BOOK NOW!’ tab located at the top of our website or call our office at (877) 899.3626.

[3] Can cannabinoids be a potential therapeutic tool in amyotrophic lateral sclerosis? (nih.gov)