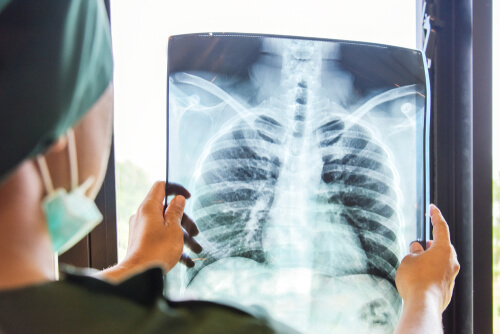 Tuberculosis is a truly ancient disease. Archeologists have found human remains with evidence of TB infections dated as far back as 4000 B.C.E. It was the reason for Robert Koch’s Nobel Prize win that earned March 24th the moniker of “World Tuberculosis Day”. Though many believe TB to have been eradicated, it is still very prevalent in certain parts of the world. For this reason alone TB is still considered an important and dangerous disease. But can medical marijuana help a patient with TB or would it do more harm than good? If you have any questions about medical marijuana, are curious if it fits your needs, or want to find a nearby Ohio medical marijuana doctor, DocMJ can help you! Our website offers a quick search of certified doctors and a quick and easy pre-qualification exam!

Tuberculosis is the name of a disease caused by a bacteria called Mycobacterium tuberculosis and it has been one of the most widely documented diseases in human history. Scientists have found Egyptian mummies with signs of TB infection and the bacteria that caused the disease was one of the main discoveries of famous German physician Robert Koch, who helped lay the foundation of modern microbial pathogenesis.

A TB infection can be either latent or active. When a person is said to have latent TB, they are carriers of the bacteria Mycobacterium tuberculosis, but do not have an active infection. This means that the person is not contagious and does not display any symptoms of infection. Active TB, on the other hand, is marked by chronic cough, fever, and weight loss. The weight loss was so common and prevalent that it earned the disease the name “the consumption”.

As you may have guessed based on the symptoms, TB mainly affects the lungs. The chronic coughing can cause bleeding in the airways and the formation of scar tissue, making breathing even years later difficult in extreme cases. The infection can also spread to other parts of the body, though this happens most commonly in people with weakened immune systems. Because of this, it is common practice for people taking immunosuppressant drugs to have annual TB tests, such as QuantiFERON or the Mantoux test. People who have had a TB infection in the past, but are currently latent, may be required to take a chest x-ray before continuing their treatment.

How Do We Treat TB?

TB treatments change based on whether it is active or latent. For an active infection, antibiotics are most commonly used to rid the system of as much dangerous bacteria as possible. Latent TB infections are also treated with antibiotics, though different antibiotics are used and are carefully monitored to not induce the evolution of a resistant strain.

Depending on if the person has any other conditions, treatment may have to be adjusted. For example, someone with HIV is much more likely to develop active TB while latent, and so must be monitored and a pregnant mother with TB may have their treatment delayed until after childbirth.

What Effect Does Medical Marijuana Have?

Marijuana’s effects on people with TB have not been researched directly, though tentative predictions can be made based on relevant data. To start, the endocannabinoid system has been found to play a part in many different body systems, including the immune and respiratory systems. In the respiratory system, it has been found that the ECS can induce bronchodilation and reduce airway inflammation, both of which are common goals of respiratory infection treatment [1]. In the immune system, the ECS helps modulate immune response overall, including immune cell movement and growth [2]. In both cases, the body’s naturally produced endocannabinoids bind to cannabinoid receptors, producing the observed results. When it comes to phytocannabinoids, such as CBD and THC, the effects may be different due to differences in binding affinities compared to endocannabinoids and their respective effects on non-ECS receptors.

On the other hand, studies have shown that vaping and smoking marijuana can have negative effects on the body. It has been found that many of the negative health effects of cigarette smoking translate to marijuana [3]. This due to the both the similarities in the mechanical process of smoking and some of the chemicals produced by combustion. Because of this, it is recommended that anyone with pulmonary disorders refrain from vaping medical marijuana when possible. In Ohio, smoking medical marijuana is illegal.

Tuberculosis is a disease caused by a bacteria. The bacteria generally targets the airways of a person and causes wasting, coughing, and inflammation. Current treatments for TB are mainly based around antibiotics, though research shows that the endocannabinoid system is a potential target for future therapies. This is because of the degree of influence the ECS has on the immune system. For people with active TB infections, it is not recommended to vape medical marijuana. If you have any questions about medical marijuana, DocMJ can help find a certified physician near you! We offer online bookings through our website and a super fast survey that will let you know instantly  if you pre-qualify for a recommendation!

[1] Endocannabinoid System in the Airways

[3] Effects of cannabis on pulmonary structure, function and symptoms