Can Nurses and Other Healthcare Workers In Ohio Have a Medical Marijuana Card? 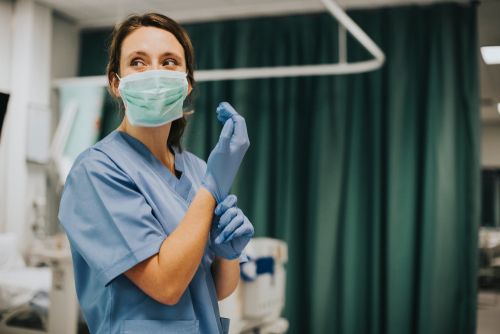 Medical marijuana, though still maturing in many respects, has come to be widely accepted publicly and socially. Many people are using medical marijuana to reduce stress or control symptoms of other conditions with great success. Due to the recency of its legalization, however, there are still many grey areas regarding who can use medical marijuana and where, including healthcare workers.

Do you live in Ohio and have any questions about medical marijuana or obtaining a medical marijuana card? The team at DocMJ is here to help! Take our eligibility survey to see if you pre-qualify for a recommendation today.

Can Nurses and Other Healthcare Workers In Ohio Have a Medical Marijuana Card?

This is a heated debate, with much more discussion surrounding it than someone might think. People have considered the benefits and dangers of medical professionals using medical marijuana, weighing both against a variety of other viewpoints. Currently, there is no law stating that healthcare workers cannot have a medical marijuana card in Ohio. However, this does not exempt those workers with medical marijuana cards from other laws regarding impairment while it works and other employer-mandated drug testing.

This is made clear, for nurses specifically, in a statement from the Ohio Nurses Association that reads, “Ohio law currently states that employers have the discretion of maintaining a drug-free environment and persons who are found to be using marijuana could be fired for just cause. Likewise, the Ohio Board of Nursing (OBN) has the discretion of disciplining the nurse in such a scenario” [1]. The statement goes on to say that the board of nursing may “deny, revoke, suspend, or place restrictions on any nursing license or dialysis technician certification issued by the board” should a licensee be found impaired.

Healthcare isn’t the only field where these rules apply either. According to the OMMCP, there are a few key areas where the medical marijuana program has impacted employers [2]. To start, employers do not have to accommodate the use of medical marijuana. So, while an employer does have to accommodate a specific condition or illness due to ADA, they are not required to have a designated area to use marijuana for example. Second, employers are allowed full discretion regarding an employee’s use of marijuana, and it can factor into any decision they make, such as hiring and promotions.

In areas across the country, some physicians have been stripped of their licenses for even using medical marijuana in their off time. In most cases, this is due to a positive result on a scheduled drug test but may also happen due to perceived impairment. While some employers choose not to test for drug use, many do, especially in the field of medicine.

Why Do Hospitals Drug Test Employees?

Drug testing has been nearly standard in the healthcare industry for decades. This is to help reduce medical errors, turnover, and other accidents. If an employee of a hospital were to test positive for the use of an illegal drug and an accident were to happen, the hospital and employee would likely be found at fault. This level of accountability is not necessarily found in every other profession. For example, a surgeon operating while under the influence of alcohol is much more likely to cause injury than a bank teller. Health care workers are also generally at higher risk for substance abuse, thought to be due to their increased exposure to stress [3].

On the other hand, some argue that drug testing should not be done on medical staff, citing weak statistical strength correlating drug use and workplace accidents [4]. This weak strength means that the drug testing only serves to better the public’s perception of the hospital rather than increase the safety of patients. They also point out that drug testing can result in false positives, resulting in huge harm to the worker’s career and life.

What do Doctors Think?

Physicians are overall divided on medical marijuana. They are generally slower than the average person to accept a new form of medicine or therapy due their high standards. No physician feels comfortable prescribing a medicine that had not been researched up to their standard. These reservations are one of the main reasons some doctors have held back on becoming certified to give medical marijuana recommendations. The research on marijuana is still largely in its early stages, with scientists only recently being able to conduct high level and consistent experiments.

This division moves past specialty lines as well. The psychological changes and mechanisms brought about by marijuana are still being studied and many different theories and schools of thought have since been thought up. Because of this, it can be difficult to determine who has a real dependence or problem with marijuana use. This has caused some physicians to speak out against certain practices regarding physicians and medical marijuana use. The lack of evidence regarding cognitive impairment, especially in the long term, has led some to believe that keeping healthcare workers from being able to use medical marijuana is keeping them from getting the treatment that can improve their lives.

While there is no law forbidding healthcare workers from using medical marijuana, their employer may have specific rules forbidding it. The laws and organizations overseeing the healthcare field strictly prohibit the use of any Illegal substance, which marijuana federally is. Therefore, it is crucial for any worker to make sure they are legally allowed to use medical marijuana, taking into account both the rules of the workplace and their governing body, before using it.