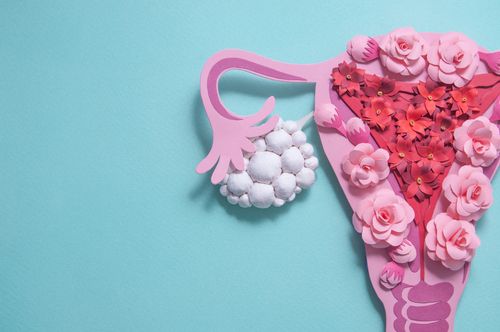 It is estimated that PCOS affects between six and twelve percent of women in the United States. Although not widely known, it is a life-long condition that can develop a wide range of symptoms. If you are looking for an affordable Ohio medical marijuana doctor, DocMJ is here to help! The first step is to complete our easy, online eligibility survey. To complete the survey simply click ‘Get Started’ from our homepage. Next, click ‘BOOK NOW’ to schedule an appointment.

PCOS stands for Polycystic Ovary Syndrome. It is a hormonal disorder which, unfortunately, also has many associated conditions, including heart disease, type two diabetes, and certain types of cancers.

Over the past few years, research on PCOS has increased dramatically, and with it, our understanding of the complexity of the disorder. One result of this is a rise in the number of diagnosed women. Specifically, one study found that, using older criteria, there was a group incidence of diagnosed PCOS around nine percent. With updated criteria, however, about twelve percent were diagnosed [1]. While on the surface it may seem worrying that more women are getting diagnosed with PCOS, the rise in numbers is actually due to more accurate methods, and means that women who previously wouldn’t receive the correct treatment may now be able to get control of their symptoms.

Researchers have also identified a couple of the possible causes of PCOS, with the main hormones implicated in the condition being androgens and insulin. Androgens are commonly thought of as male hormones, but every female has some level of androgens at any given time, as they are precursors to the “female” estrogens and regulate several pathways in the body. Insulin is the hormone generally released after eating and modulates the body’s uptake of glucose. Studies have found that, in women with PCOS, nearly two thirds exhibit hyperandrogenism despite normal LH levels (LH is the hormone that signals to release androgens and start ovulation) [2]. It was also discovered that insulin resistance was common in women with PCOS regardless of their weight [3].

To start, the unknown cause of PCOS makes it difficult to comment on any therapeutic value marijuana may have on the condition as a whole. However, we can investigate research regarding the endocannabinoid system and the experiences of those women with PCOS who choose to take marijuana in any form.

Importantly, the hypothalamic-pituitary-ovarian (HPO) axis may also be influenced by the endocannabinoid system. The HPO axis is an especially important hormonal pathway that is vital to normal reproductive function, and recent animal studies have found that the hypothalamus may play a larger role in PCOS than originally anticipated [5][6]. On top of this, cannabinoid receptors have been found in both the hypothalamus and ovaries [7]. Therefore, the belief that medical marijuana may have a direct therapeutic effect on PCOS is not necessarily out of nowhere.

Another mysterious component of PCOS is the requisite insulin resistance. As we found previously, insulin resistance seems to present itself in women with PCOS no matter their weight. One study has put forth that this may in fact be due to overexpression of a specific cannabinoid receptor [8]. Interestingly, another study found that insulin sensitivity of adipocytes (fat tissue) may also be controlled by the endocannabinoid system, except that higher receptor activation led to higher sensitivity to insulin [9]. This finding, along with those discussed earlier, has led some researchers to believe that PCOS may be a result of an unbalanced endocannabinoid system [10].

Rather than directly targeting the “causes” of PCOS, though, most users try to mitigate their symptoms and increase their quality of life. In this way, medical marijuana excels for many. For example, CBD in marijuana has been found to act as a natural anti-inflammatory and analgesic, both of which could potentially help women with PCOS.

Another important possible benefit of medical marijuana is the elevated mood many users experience. For people with PCOS, depression is a very real side effect which can have lasting implications. In some cases, this depression can coincide with increased anxiety and chronic stress, both of which are areas of study in marijuana research.

PCOS is a very common condition in women of reproductive age. Though the exact cause is unknown, there is evidence that it may be due to genetic reasons, hormonal imbalance, or a problem with the person’s endocannabinoid system. Marijuana may influence these possible causes, but research has not currently found any direct link. Most medical marijuana users are more likely to find lessened symptoms and overall higher quality of life, especially due to lower pain and increased mood. If you are considering medical marijuana and have any questions, it is always good to speak with a certified Ohio medical marijuana doctor. Schedule your appointment today at DocMJ.com or over the phone with a Patient Care Coordinator at (877) 899-3626.