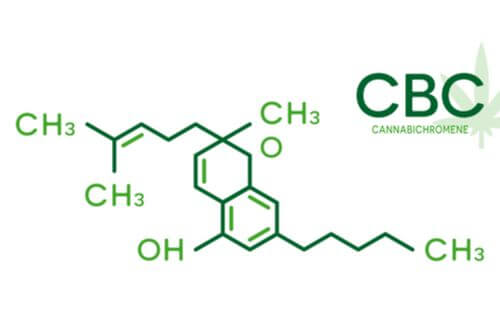 Many scientists who study marijuana focus their efforts on understanding the complexities behind how cannabinoids affect the human body. Cannabinoids are natural chemical compounds that occur in the Cannabis sativa plant. Most people know or have heard about delta-9-tetrahydrocannabinol (Δ9-THC) because it is the chemical responsible for the psychoactive effects of marijuana, but over 100 cannabinoids [1] have been identified to date. In this article, we explore the cannabinoid Cannabichromene (CBC), the “second most abundant cannabinoid in drug-type cannabis,” for its remarkable antibacterial properties [2].

Do you qualify for an Ohio medical marijuana card? Completing our online eligibility survey takes only 5 minutes. Find out if you pre-qualify for a recommendation today!

The components of the marijuana plant can be difficult to understand because of their complexity. With so many terms, classes, and types of marijuana compounds, some clarification is necessary. The specific difference between phytocannabinoids and cannabinoids is that phytocannabinoids is an umbrella term relating to any cannabinoid (chemical compound) that naturally occurs within cannabis plants. “These naturally occurring cannabinoids are distributed among ten subclasses, including Δ9- and Δ8-THC, cannabidiol (CBD), cannabigerol (CBG), cannabinol (CBN), Cannabinodiol (CBND), cannabielsoin (CBE), cannabicyclol (CBL), cannabitriol (CBT) and miscellaneous type (30 known)” [3].

Not as widely known as other cannabinoids found in marijuana, Cannabichromene (CBC) has many healthful benefits. Scientists consider this cannabinoid to be the “stem cell” of cannabinoids because it contains the chemicals necessary for the development of the important and commonly known cannabinoids THC and CBD [5]. CBC is non-intoxicating and is produced in the trichomes (shiny crystals on the leaves and buds) of the cannabis plant. It works by binding to cation channel proteins in the body (known as TRPA1), rather than the more commonly known receptors CB1 and CB2. Long known for its antibacterial properties, it has also been shown to improve many medical conditions, including pain, cancer, inflammation, depression, and acne [6].

It has long been known that cannabinoids such as cannabichromene contain antibacterial properties. This is important because pharmaceutical drugs can become ineffective when the bacterium they are designed to treat become resistant. New research has determined, for example, that some cannabinoids like cannabichromene are unaffected by superbugs like MRSA that tend to become drug-resistant.

In the United States, cannabis was tested as a treatment for tuberculosis and other serious diseases as early as the 1950’s. It has since been known for its antibacterial properties. However, research into using it as an antibiotic has been very limited due to lack of knowledge and the controversy surrounding recreational use of cannabis. Giovanni Appendino of Piemonte Orientale University in Italy, and Simon Gibbons of the School of Pharmacy at the University of London, U.K., are creating new research methods to discover ways in which cannabinoids can kill MRSA (methicillin-resistant Staphylococcus aureus)– a bacterium that impedes the healing of infections because it is resistant to antibiotics. It is common for people to carry MRSA on the skin, but when those with weak immune systems absorb it through an open wound, it can spread through the body, causing life-threatening infections.

Many populations continue to see a rapid increase in antibiotic-resistant bacterium, with some strains becoming resistant to a drug called vancomycin. Vancomycin is typically used as a last resort when other drugs have failed. Remarkably, Appendino, Gibbons, and their team of researchers used cannabinoid extracts to attack six different strains of MRSA and found they were able to kill the bacteria as well as vancomycin and other antibiotic drugs! “The cannabinoids even showed exceptional activity against the MRSA strain that makes extra amounts of the proteins that give the bugs resistance against many antibiotics [and allow the bacteria to] hoover up unwanted things from inside the cell and spit them out again” [7]. Frank Bowling of the University of Manchester has treated MRSA-infected patients successfully by using maggots, and said, “any alternative treatment that removes MRSA from the wound and prevents it from spreading into the body is fantastic and preferable to using antibiotics that have strong side effects and against which resistance is already developing” [7].

Published in March of 2012 in Scientific Research, the article Antimicrobial Activity of Cannabis sativa L. details the ways in which scientists tested the cannabis sativa plant for its antimicrobial properties. Using petroleum ether, methanol extracts, and the oil of the plant seeds, scientists looked for activity when cannabis was mixed with bacterium using the cup plate agar diffusion method. Each of the bacterium were mixed with the agar then placed into petri dishes that were then incubated for 18 hours. Afterward, scientists measured the growth diameter of each bacterium to check for changes. Each of the cannabis extracts when combined with the bacterium exerted antibacterial activity in varying but substantial degrees, measured in millimeters [8]. While more research is needed to bring understanding to the reasons behind why cannabis provides antibacterial properties, the future is bright with potential that cannabinoids like CBC will deliver greater results in attacking drug-resistant bacteria.

Whether medical marijuana will help your condition depends on many factors best evaluated by a medical doctor. If you feel you may benefit from medical marijuana, the first step is to take our eligibility survey. In just 5 minutes, you could pre-qualify for a Ohio medical marijuana recommendation. An Ohio Medical Marijuana Doctor can then determine if you qualify during an in-person exam. For more information, visit https://docmj.com/states/ohio-medical-marijuana-card/.