Beginning after July 1, 2017, countless people in the state of Florida suffering from a wide range of illnesses will be able to access medical marijuana to ease the pain and suffering their conditions cause. However, there are a few things you need to know before deciding whether or not medical marijuana is an option for you.

Unfortunately, various states and the federal government are not on the same page when it comes to medical marijuana. These subtle differences may mean the difference between failing or passing a background check for people in Florida who choose to seek treatment with medical marijuana.

This means, even though it’s perfectly legal to use medical marijuana to treat certain health conditions and illnesses in Florida once you’ve proven your eligibility, the United States continues to view marijuana as a Scheduled I controlled substance. Anyone contemplating treatment involving medical cannabis in Florida needs to know what limitations this brings, including the ability to own or carry a gun.

Here, we’ll provide an overview of getting medical marijuana in Florida and how it may impact you if you’re a gun owner or want to carry a concealed weapon.

What Conditions Are Treated With Medical Marijuana in Florida?

With more than 70 percent of Florida voters making their mark in favor of Amendment 2, Florida residents appear to overwhelming believe in the idea of offering compassionate care.

Also known as the Florida Medical Marijuana Legalization Initiative, Amendment 2 and the expanded qualifying medical conditions became effective on January 3, 2017 and approved licensed physicians to provide certifications to eligible patients to use medical marijuana for certain conditions in the state of Florida, including:

In addition to these conditions, Amendment 2 allows physicians the opportunity to certify patients for medical cannabis when diagnosed with certain other “debilitating medical conditions” that are comparable in class or kind to those listed above if they are debilitating. This includes some of the following conditions:

Of course, these are just a few examples of how medical cannabis treats certain conditions. A licensed and qualified physician will have some degree of discretion when it comes to prescribing medical marijuana as a treatment for any number of conditions.
So how do you get permission to use medical marijuana in Florida? The process is rather simple. Here’s what you need to do.

Getting Your Medical Marijuana Card in Florida

The first step in getting permission to use medical cannabis in Florida is to meet with a physician who is licensed to issue medical marijuana certifications. You must be a Florida resident and meet certain medical criteria to receive this certification.

If you have one of the conditions slated for treatment with medical cannabis and choose a licensed medical marijuana physician who is thorough and methodical in his or her approach to treatment, you can likely feel confident your treatment may help. This is, of course, assuming you’re properly supervised by your physician and closely follow your doctor’s recommendations. 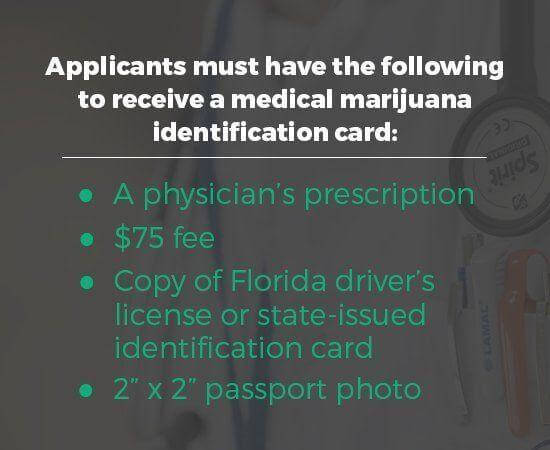 Applicants must have the following to receive a medical marijuana identification card:

If you want to carry a concealed weapon, it’s best to learn all the facts about medical cannabis and what it can mean for your ability to own or possess a firearm in the U.S. before you sign up for your medical marijuana card.

For now, let’s explore what the law has to say about the possession of firearms and the use of controlled substances. Then, we can discuss what that means for you if you decide medical cannabis is the best treatment option for your condition.

Can I Own a Gun If I Have a Medical Card? Federal Laws About Marijuana and Gun Ownership

While there are many areas where the law in the United States is clear as mud to some people, the laws regarding the possession of guns and the use of controlled substances are quite clear. In fact, the federal government has effectively banned the sale of guns to anyone who uses pot. Whether it’s medicinal in nature does not matter, as the government does not distinguish between the two.

The U.S. Government feels that all marijuana, even medical marijuana, qualifies as a controlled substance. This failure to differentiate between the two leaves people who use medical cannabis as a treatment unable to buy or possess a firearm. What does this mean for you?

If you’re a huge supporter of Second Amendment rights, you likely have questions like, “Can you own a gun with a medical card?” on your mind. You might think that if the answer to this is “No,” it might not stand in court. Unfortunately, there is legal precedent to support the federal ruling on the matter. We’ll examine those next. 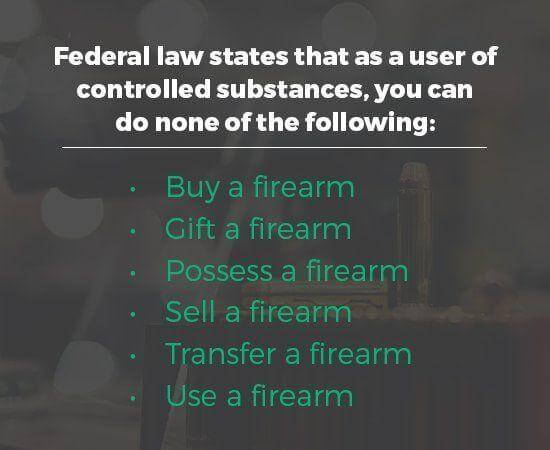 Federal law goes further than simply prohibiting the purchase or possession of firearms by medical marijuana users. It goes so far as to state that as a user of controlled substances, you can do none of the following, according to The Truth about Guns:

People who believe in limited federal government and who are strong state’s rights advocates may argue that, since the state has made marijuana legal, the federal government should not be the final authority — especially considering that gun ownership is a Constitutionally protected right.

Unfortunately, legal precedence thus far has supported the federal government’s stance on the gun issue. The 9th U.S. Circuit Court of Appeals has upheld a lower court finding that a Nevada plaintiff lacked standing to challenge a ban on buying a gun simply because she possessed a Nevada medical marijuana registry card.

The LA Weekly reports that this ruling cited a letter from the U.S. Bureau of Alcohol, Tobacco, Firearms and Explosives (ATF) stating that people who use marijuana, regardless of state law, are “prohibited by federal law from possessing firearms or ammunition.” Why does the government take such a strong view on medical marijuana?

The Government’s Stance on Marijuana — Medical or Otherwise

The federal government is at odds with states’ rights on the issue of medical marijuana. The Controlled Substances Act of 1970 listed marijuana, along with LSD, heroin, mescaline and peyote, as Schedule I controlled substances. This rendered them illegal to use and prescribe by federal decree.
As far as the federal government is concerned, it doesn’t matter that many states have made it legal for patients to receive treatment with medical marijuana for managing pain and other symptoms that no other drugs currently on the market can touch. The government views this as a dangerous drug that can cause erratic behavior among the people who use it.

For that reason, the government has identified the drug as one that should not be mixed with gun use or ownership in this country and has established laws against it. The fact that some states view it differently and that science paints a different picture of medical cannabis has not, as of yet, changed the federal government’s stance.

Opponents of the ruling believe that by extending the ban to medical marijuana card holders, the government is essentially violating their Second Amendment rights. In fact, some argue it’s discriminatory to hold medical cannabis users to a higher standard than those who use opiate-based medicines or alcohol.

The alcohol argument is one that rings particularly true, as alcohol is known to escalate instances of domestic violence and assault. The LA Weekly quoted attorney Chaz Rainey as saying, “We live in a world where having a medical marijuana card is enough to say you don’t get a gun, but if you’re on the no-fly list, your Constitutional right is still protected.”

Some also argue that the paradox creates a group of second-class citizens who are acting in accordance with state laws and physician recommendations and who are being treated as criminals by the federal government. When people are suffering, they may be willing to give up their right to own, use or possess guns.

The question is, should they have to? It seems a high price to pay for relief.

Is There Light at the End of the Tunnel?

When it comes to concealed carry and medical marijuana in Florida, licenses are suspended or revoked as soon as you obtain a medical card. For the time being, the question of “Can you own a gun if you had a medical card?” has been decided and the answer is an emphatic “No.” And yet, there is hope on the horizon from some unexpected advocates.

Alaska senator Lisa Murkowski, who opposed Measure #2, which allowed for the legalization of marijuana in the state of Alaska, penned a letter to then-U.S. Attorney General Loretta Lynch. This letter addressed the fact that no action has been taken by the federal government to balance more permissive state laws with the stricter federal laws as they relate to the Second Amendment and medical marijuana.

One of the concerns cited in Senator Murkowski’s letter to the Attorney General was concern that people would become exposed to criminal liability by incorrectly answering questions on firearm applications by answering the way they believe coincides with the law.

What this means is that law-abiding citizens may believe their marijuana use is legal and protected by the law — which it is, in certain states — without knowing federal laws are much stricter. Her suggestion is to expand the Cold memorandum to protect these Second Amendment rights or to make changes in the law to accommodate changing state laws throughout the country.

The Situation for Medical Card Holders in Florida

Can you own a gun and have a medical card in Florida? That’s the question it all boils down to. The answer, for the moment, is “No.” The federal law in this matter trumps state law. That said, as more states allow the use of medical marijuana, pressure will grow in Washington, D.C. to make changes that will accommodate these differences.

The real question that remains is whether or not medical cannabis is the right treatment option for you. While giving up your Second Amendment rights may seem like a hard price to pay, living and perhaps even dying with dignity and without unnecessary pain is a strong incentive for many Americans and Floridians to do so.

Work with your physician and discuss the pros and cons of medical marijuana, including the impact it will have on your ability to continue to own the guns you already possess and buy firearms in the future. Just make sure you’re making an informed decision based on the current rule of law compared to the medical and mental health benefits medical marijuana has to offer you.

Options Available to You

If you are someone who believes strongly in both your Second Amendment rights and your right to take legally recommended medical marijuana for your illness, you may have a difficult decision to make for the short term. But for now, you have two choices:

You can’t do both. Yet, the silver lining is that there is growing attention to this gray area of law. You can do your part to broaden the attention. Become an advocate for others who are afraid to speak up. Write to your Representatives and Senators. Write letters to the editors of newspapers.

Raise awareness of the problems associated with gun ownership and medical marijuana use. Call up your news organizations and discuss the issue as a human-interest piece. The more people who are aware the problem exists, the more pressure will be placed on leaders in Washington to create changes that will effectively correct the problem in the future.

Get a Quick and Simple Florida Medical Marijuana Recommendation