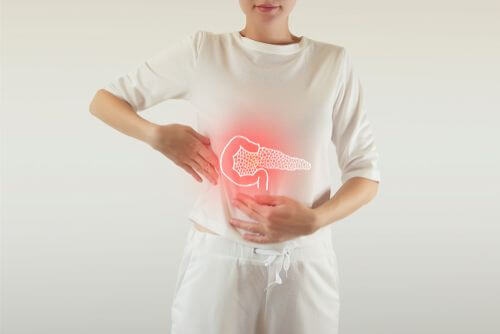 November is Pancreatic Cancer Awareness Month and represents a time for us to take a deeper look at one of the most deadly forms of cancer and its possible treatments. Though not as common as other cancers, pancreatic cancer is responsible for nearly half a million deaths globally every year[1]. This is one reason so many physicians, researchers, and patients have looked for any possible beneficial therapy, and some have found success with medical marijuana. If you are interested in medical marijuana and want to find a certified Ohio medical marijuana physician, the DocMJ website offers online bookings and a quick eligibility survey where you can find out instantly if you pre-qualify for a recommendation!

The pancreas is a vital organ with both digestive and hormonal functions. It is one of the few organs with both endocrine and exocrine function, meaning it secretes chemicals both into the bloodstream and into a duct. For its role in the digestive system, it releases pancreatic juice, which contains a large variety of important enzymes and helps neutralize the highly acidic stomach acid before making its way deep into the small intestine. On the hormone side, the pancreas is largely responsible for regulating blood sugar levels. Pancreatic alpha cells release glucagon whereas beta cells release insulin, which work as opposites. When blood sugar levels rise, insulin is released which signals certain cells to take up glucose from the bloodstream. Glucagon acts exactly opposite this and stimulates two processes called gluconeogenesis and glycogenolysis which raise blood sugar levels.

Unfortunately, the prognosis for those diagnosed with pancreatic cancer is grim. The World Health Organization placed the five year survivability of pancreatic cancer at only nine percent [2]. If the cancer is found in its early stages, the likelihood of survival is much higher, but current testing methods may give false negatives for some early-stage patients.

The reason so many people have turned to medical marijuana lies in its ability to fight so many of the common symptoms of diseases and even the side effects of some treatments. For example, in late stage cancer patients, wasting syndrome can lead to lowered life expectancy. The extreme weight loss that characterizes the condition can also mentally affect patients in many ways, further decreasing their quality of life. High THC marijuana has been found to be a powerful appetite stimulant [4] and can help these patients get better control of their appetite, increasing their energy levels and lifting their mood.

Due to the severity of pancreatic cancer, aggressive chemotherapy may be used to fight the proliferation of cancerous cells. Unfortunately, chemotherapy has many side effects, including extreme feelings of nausea and vomiting. These side effects are so common, in fact, that Chemotherapy Induced Nausea and Vomiting (CINV) has become a diagnosable condition, one which medical marijuana can also help control.

Medical marijuana has actually been used since the 1980’s to fight CINV, but has only recently reached common use after years of research and improvements. Dronabinol was first FDA approved in 1985  and is a synthetic form of THC, the primary psychoactive ingredient in marijuana. It works by targeting the part of the brain that controls nausea and vomiting, and modulating the endocannabinoid system to reduce these feelings [5].

There are many other problems that patients with pancreatic cancer may face, including problems sleeping, depression, and chronic pain. In many of these cases, medical marijuana may be able to help fight these symptoms, and allow the user to increase their quality of life. Some users have also stated that they believe medical marijuana has aided in, or was the reason for, their successful cancer treatment. As far as anti-cancer properties go, the scientific literature is still not substantial, and is not generally accepted by the scientific community at large. The most accepted use of medical marijuana is as an addition to current therapies and treatments to reduce negative effects rather than replace them and fight cancer directly.

Pancreatic cancer is a very serious diagnosis and is one of the most deadly forms of cancer.  There are two types of pancreatic cancer, though cancer of the exocrine cells is by far more common. Medical marijuana can help those who are diagnosed by relieving some common symptoms and working alongside the patient’s already established treatment routine. If you have questions or concerns about obtaining your Ohio medical marijuana card and would like to speak with someone from our office, DocMJ Patient Care Coordinators can be reached Monday-Friday at (877) 899.3626 or through the Live Chat feature on our website. Be sure to check out our FAQ page for answers to frequently asked questions.