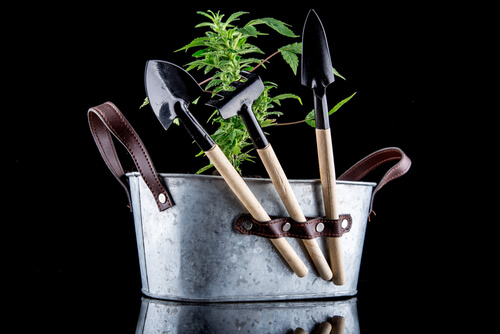 Medical marijuana patients often wonder: If I know a cannabis strain works for me, why can’t I grow it myself at home? The short answer is, unfortunately, it’s illegal right now in Ohio, Florida, Pennsylvania, and 14 other states. Home-growing of cannabis is a hotly-debated topic across the country where access to affordable medical marijuana from dispensaries may be limited. Home-growing could provide a much-needed alternative for many patients.

As more patients enter medical marijuana programs, so does the need for specialty cannabis cultivated for particular medicinal properties. Certain strains, cannabinoid combinations and terpene profiles have shown to possess healing properties that might not be accessible in forms that you find in your local dispensary. Across the U.S., in states where less restrictive laws allow it, home-growers have filled in the gaps to become an integral part of the cannabis supply chain.

It is not legal to grow marijuana plants at home in Ohio, but Michigan is among one of 19 states where you can. Michigan has some of the least restrictive laws governing home growing in the country. Anyone can grow up to twelve plants in their home for personal use in Michigan and caregivers can have up to five patients for which they can grow up to 12 plants. Michigan home-growers are allowed to grow either indoors or outdoors in an enclosed locked facility.Home-growers in Michigan are allowed to make concentrates or use the marijuana in any other way allowed by law, which is also something not permitted in Ohio.

Legalizing home growing in many states has been chiefly about giving more patients access to cannabis. Patients unable to drive to a dispensary or outside of the 25-mile radius of a dispensary still get the marijuana they need when the state allows home grow. Beyond access to high-quality medicine, proponents of home-growing believe that it will ultimately bring dispensary prices down as demand shifts.

Patients can experience numerous benefits by growing marijuana at home. Gardening can positively affect your mental health. Horticultural therapy is an established psychological treatment. By learning about strains, cross-breeding, and genetics, patients gain an appreciation for the cannabis plant. Marijuana can carry a hefty price tag since it isn’t typically covered by insurance. By making home growing legal, many people who could not afford medical marijuana otherwise could get access to a medicine that could positively impact them significantly.

One of the main drawbacks critics cite against legalizing home-growing marijuana is safety. Marijuana purchased from a state dispensary receives thorough testing for pesticides and mold. Home-growers that lack experience may make mistakes or use shortcuts that experienced cultivators wouldn’t, resulting in medicine that may not be safe to use.

While many cultivators don’t support home growing due to concerns over market share, several cultivators in Ohio have come out publicly to support those who want to grow their medicine at home. Akron-based Galenas and Fire Rock Ltd., and Zanesville’s Grow Ohio were three cultivators that recently vocalized support for home grow.

Galenas publicly specified across their social media platforms that they support patients’ right to grow their own medicine at home. It may seem counterintuitive for a company to support what ultimately could be viewed as a competitor. But Galenas Head Cultivator Christine DeJesus explained that when patients can grow at home, it helps the industry as a whole and drives prices down.

Erik Altieri, executive director of NORML, says it’s time for everyone, including cultivators, to support patients’ right to home-grow. “From our perspective, it’s really hard to see any real reason—other than individual and corporate greed—to be against home cultivation at this point.”

Ohio advocates and legislators have put forth various home-grow initiatives through the years. The latest initiative, House Bill 210 was introduced in March 2021 by Ohio Rep. Terrence Upchurch (D-Cleveland), and Rep. Sedrick Denson (D-Cincinnati). If passed, the bill would:

“So this bill includes decriminalization similar to what’s passed in the other 22 cities in the state of Ohio (the basic decrim portion of it). As well as a 12-plant home grow. It also includes automatic expungement, so for anybody that’s been in trouble for marijuana possession charges, we’re asking the state to automatically expunge some records to really bring it level for everybody in our state.

Harris stressed that home grow and decrim are part of NORML’s mission to help to solidify patient rights in the state when it comes to their cannabis use, especially for those who cannot get a medical card: “We’ve hit 3 million people protected in the state of Ohio. And there’s 11 and a half million of us. So we’re really trying to get the state to stand up and do what’s right for all of Ohio. And that’s just, give us equal access, fairness, and equality across the board when it comes to marijuana.”

Harris suggests that patients who support home grow reach out to the criminal justice committee and their local reps at the statehouse and let them know that citizens in the state are supporting this. “The more people we can get involved, actually hands on, whether it’s just making a phone call or sending an email or working on the campaign team, we definitely need as many voices around the state as we can.”

Harris also noted that there will be a Lobby Day at the statehouse regarding HHB201 that’s scheduled for July 22nd, 2021.

The Need for Further Support

This particular bill is not expected to move on for further consideration without bipartisan support, according to State Rep. Juanita O. Brent (D-Cleveland). Brent is a Democrat House member who has also sponsored medical marijuana reform legislation. Additional legislators from both parties would need to sign on as co-sponsors on the bill in order to schedule a hearing on the merits of the bill.

To voice your support for HB210, you can also sign this petition being circulated by The Sensible Movement Coalition.

To learn more about how you can lend your support to the home-grow movement, contact the Sensible Movement Coalition or NORML Appalachia of Ohio.

To learn more about medical marijuana in Ohio, schedule an appointment with DocMJ today.