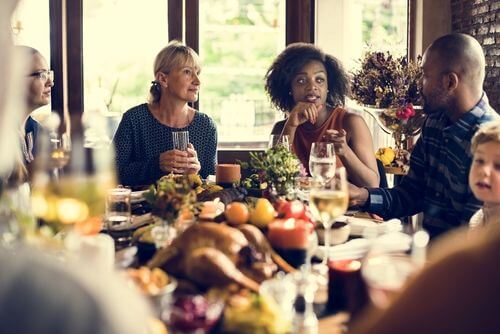 If you find yourself wondering what to talk about at the Thanksgiving table, chances are marijuana legalization won’t be your go-to topic, but most people are more comfortable discussing it today than in times past. Public opinion around this topic is changing rapidly because it has been covered widely in the media for several years now [1]. Survey data collected from U.S. adults between 1969 and 2018 show a drastic increase in the percentage of those who say marijuana should be made legal – from 12 percent to now 62 percent and counting [2]!

Should you encounter a debate, don’t get defensive. While your views on the legalization of marijuana may be progressive in nature, most people don’t like a “know-it-all” that doesn’t show empathy. Try to listen and understand where people are coming from because many have traditional views that stem from their upbringing during the “Just Say No” era, for example. Showing understanding while sharing facts is key to getting your own points across, which just might calm and allay their fears. Steve Downing, former deputy chief of the Los Angeles Police Department once said, “The war on drugs was a failure. I should know as I once led it. Our policies have done more harm to people and community than marijuana. We demonize people. We unnecessarily criminalized people” [3].

Drug prohibition began as a means to dampen the growth of the drug supply, but in fact, it created a profitable black market for criminal enterprises and drug cartels alike. One study calculated that marijuana alone brings in 20-30 percent of revenue for drug cartels. Hence, the legalization of marijuana means less criminal activity and fewer convicts. In fact, the U.S. incarcerates more people than in any country in the world. There are hundreds of thousands arrested for the possession of marijuana each year with the highest percentage of the population being black. While nearly the same number of white and black Americans use marijuana, black Americans are almost four times as likely to be charged with the possession of marijuana than white Americans. These incarcerations impose huge financial burdens on the United States, but greater is the cost to social justice. Concerning these arrests, Washington D.C. Police Chief Cathy Lanier has said, “All those arrests do is make people hate us. . .Marijuana smokers are not going to attack and kill a cop. They just want to get a bag of chips and relax. Alcohol is a much bigger problem” [3].

As of this writing, 33 states and Washington D.C. have legalized marijuana in varying degrees. That means more than half of the United States now recognize the many benefits of marijuana. Scientists the world over continue to conduct in-depth clinical studies which prove the ability of marijuana to help with ailments such as cancer, epilepsy, AIDS, PMS, glaucoma, fibromyalgia, and more. Remind your family that our endocannabinoid system is designed specifically to respond to the chemical compounds found in cannabis. If they still aren’t convinced, most have heard of CBD – the chemical compound that doesn’t contain psychoactive properties and therefore doesn’t create the feeling of being high. There is no denying that CBD is therapeutic for pain, insomnia, inflammation, and epilepsy, to name a few. In particular, the form of childhood epilepsy known as Dravet syndrome that is impossible to cure or control is dramatically improved by “Charlotte’s Web,” a CBD-dominant strain of marijuana. For those curious about the benefits of marijuana, CBD is a great starter topic for gentle conversation [4].

In the United States, the most common use for marijuana is pain. It helps millions of Americans, especially the aging, deal with their chronic pain while avoiding the overuse of unsafe opiates and other prescription drugs. Since there is no such thing as a marijuana overdose and marijuana is not addicting, it is quite obviously the safer alternative. Many who are sensitive to NSAIDs like Aleve or Advil due to issues with the kidneys, ulcers, or GERD find marijuana more effective and without side effects. Those with multiple sclerosis or general nerve pain have few options to remedy their pain and the prescribed opiates that do exist (i.e.: Lyrica and Neurontin) are highly sedating. These patients find that using marijuana allows them to perform activities they were previously disabled from without feeling disengaged and lethargic. Marijuana is a muscle relaxant that helps relieve the tremors experienced by those who suffer from Parkinson’s disease, as well as pain from interstitial cystitis, fibromyalgia, endometriosis, and other conditions known to cause chronic pain. Many find success in managing nausea and weight loss with marijuana. Combat veterans find it helpful for managing their PTSD. HIV patients suffering from wasting syndrome and pain find relief through marijuana, as well as those with irritable bowel syndrome and Crohn’s disease. While this is not meant to be an exhaustive list, it is a good overview of the many benefits to marijuana. As with any medical claim, these statements should be “critically evaluated and treated with caution” [5].