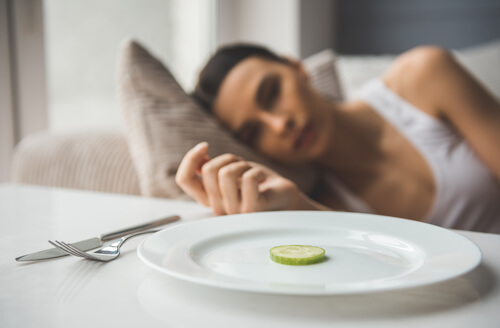 Eating disorders are serious medical conditions that are just now getting the level of  public attention they deserve despite their prevalence in recent history. While many people still regard eating disorders as easy fixes, research is showing that many aspects of these disorders are more similar to addiction and mental illnesses than one would expect. This can mean treatments routes including medication, therapy, and, possibly, marijuana. If you want to learn more about medical marijuana, DocMJ is here for you! We offer local online booking through our Ohio homepage where you can find a certified physician and an eligibility survey which can tell you if you may instantly pre-qualify for a recommendation right from your home!

Eating disorders are much more complicated than they may seem on the surface. After all, people need to eat. Some people need to eat more than others, some less, some people can’t stand the sight of certain foods while others will eat anything put in front of them. So, when exactly does over- or under-eating, or other behaviors, become a disorder?

Generally, a disorder is a disruption of regular function of a part of the body. It can result from a disease, but is not the disease itself. When it comes to eating disorders, this can mean eating so much or so little as to cause harm to oneself, or to focus on diet to the point of total obsession. Commonly, eating disorders are connected to other disturbances in thoughts or behaviors. Anorexia nervosa, for example, is a disorder where the person may view themselves as being overweight, leading to them restricting food intake, using appetite suppressants to fight hunger, and weighing themselves many times throughout the day.

Other examples of eating disorders are bulimia nervosa and binge-eating disorder. The first is marked by periods of the person eating large amounts of foods, followed by a compensation, such as forced emesis, fasting, or excessive physical exercise. Binge-eating disorder occurs when a person eats excessive amounts of food in a small amount of time. Unlike bulimia nervosa, however, it is not followed by a compensation. People with both disorders often feel helpless during binging episodes and feel as though they cannot control themselves.

Eating disorders themselves are also often caused by, or concomitant with, other mental and physical problems. According to one study, most people who developed anorexia showed signs of anxiety disorder for years beforehand, over ninety percent of people who developed an eating disorder experienced at least one potentially traumatic event in their lives, and over twenty percent of participants with an eating disorder showed signs of PTSD [1]. Physical issues like heart arrythmias, ulcers, and even erosion of tissues such as the teeth or esophagus.

Mental orders and marijuana may seem like a strange combination to some people, but research has recently found that the endocannabinoid system has profound influence on our moods and behaviors, enough so that a branch of research is now dedicated to finding pharmacological targets for future mood and anxiety disorder treatments using it [2]. In regards to eating and appetite specifically, the endocannabinoid system has been implicated in the formation of certain eating disorders. One study found that overactivation of endocannabinoid hotspots in brain reward circuits can result in a stronger pleasurable reaction to certain foods, resulting in overconsumption [3].

While dysfunction of the endocannabinoid system has been linked to certain eating disorders this does not mean that marijuana would necessarily cause or increase the risk of developing one. Like most medicines, there are pros and cons to its use. For some people, marijuana use has been linked to increased feelings of anxiety, which could make a person suffering from an eating disorder more likely to relapse, binge, or withdraw further. The appetite stimulation marijuana can cause may also make some users feel less in control and more likely to binge eat, furthering a destructive cycle.

On the other hand, marijuana may be a powerful ally for some people with eating disorders. CBD has been found to be a great anti-anxiolytic and antidepressant effects, and has shown potential for use as a treatment for multiple other anxiety disorders, which may help reduce negative emotions and fight potential triggers for those currently diagnosed with an eating disorder and those who are at a high risk of developing one [4]. Marijuana may also help elevate the user’s mood, fight chronic pain that due to physical or neuropathic damage from an eating disorder, and help reduce some side effects of common medications used as treatments for these disorders.

Of course, any form of a mental disorder is an extremely complicated issue that has many facets and variables. Marijuana has both potential benefits and risks and must be used carefully and safely. For many users, medical marijuana works best as a complement to traditional therapy and pharmaceutical treatments.

There are many different eating disorders that are often linked to other mental and physical problems. These disorders are often debilitating and can cause numerous other problems for those diagnosed. Marijuana can have both positive and negative effects on those with these disorders and must be used carefully to minimize risk. If you are considering getting a medical marijuana recommendation, or have more questions about medical marijuana, DocMJ can help find a certified medical marijuana physician near you! You can find and book a Telemedicine appointment through our website and take our eligibility quiz which can tell you if you may instantly pre-qualify for a recommendation!

[4] Cannabidiol as a Potential Treatment for Anxiety Disorders