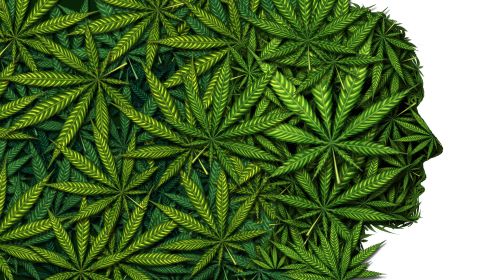 CBD is one of two primary cannabinoid compounds found in marijuana. Over time, it has become as commonly known as THC (delta-9 tetrahydrocannabinol) and comes from cannabis plants containing less than 0.3% THC. CBD does not bring on any psychoactive effects, or the feeling of being “high.” It has become widely accepted as therapeutically beneficial such that the Food and Drug Administration (FDA) approved the use of CBD for prescription purposes beginning in June of 2018. Studies have begun to show how CBD may improve brain function, even slowing the progression of Alzheimer’s for patients in the early stages of development [1].

Understanding how CBD affects brain function first requires an understanding of how it gets used by the body. The neuro-modulatory system in the human body is known as the endocannabinoid system (ECS). Preliminary research suggests it is responsible for the regulation of physiological as well as cognitive processes, such as pregnancy/fertility, pre- and postnatal development, mood, memory, and even the “pharmacological effects of cannabis” [2]. The goal of the endocannabinoid system is to maintain “homeostasis,” or a stable environment internally despite external changes in the environment. Cannabis, including CBD, contains chemicals that naturally mimic these endocannabinoid messengers and bind to the same receptors. Clinical trials show these compounds may be useful for the treatment of some diseases, pain, and even mental health conditions [3].

One way in which CBD improves brain function is by reducing inflammation. Inflammatory response is necessary for the body to survive, but when overactive, causes “neuroinflammation” which is responsible for many neurological conditions. Studies have linked inflammation to issues such as anxiety, depression, memory trouble, stroke, epilepsy, Alzheimer’s disease, fatigue, and brain fog. In addition, the same studies suggest CBD is able to slow inflammatory responses in the body. In terms of brain function, reducing this response means alleviating many symptoms associated with neurological conditions.

Keeping a healthy brain as one ages is extremely important, especially since most people experience a slow decline in memory and learning capabilities as they age. Still for some, that decline is more dramatic. “Currently, 50 million people are living with dementia globally, and that number is projected to nearly triple by 2050” [3].  “Age-related cognitive decline” has many causes ranging from lifestyle habits to genetics, but also from decreases in neuroplasticity and neurogenesis. “Neuroplasticity is the ability of your brain to change and reorganize and is the process through which all memory and learning take place. Neurogenesis is the birth of new brain cells” [3]. One study on mice determined CBD reduces stroke-induced neuroinflammation and increases neuroplasticity and neurogenesis [3].

Perhaps the most commonly known neurological disorder, Alzheimer’s disease is a form of dementia exacerbated by inflammation, brain cell decline, and oxygen buildup. More specifically, when inflammation occurs in the brain, excess oxygen is released in brain cells, leading to brain deterioration and memory loss. This is known as neurotoxicity, and it affects more than five million people in the United States alone [4]. CBD has been shown to reduce these factors by helping clear disorienting blockages. As an antioxidant, CBD decreases the excess oxygen caused by brain inflammation [4]. The aforementioned endocannabinoid system is comprised of two receptors: CB1 and CB2. “CB1 is present in each part of the brain, including the hippocampus, which is responsible for our memory function and learning ability. CB2 receptors live in certain immune cells in our brain called microglia. The endocannabinoid system that responds to the signals sent by CBD products is largely responsible for memory and the hippocampus is the first major part of the body to be destroyed by Alzheimer’s disease” [5]. As in many neurological disorders, ongoing research finds CBD to protect nerve cells against deterioration and provide antioxidant properties to the whole body, including the brain.