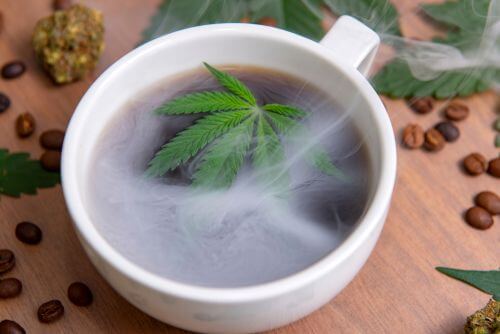 Here’s What Happens When You Mix Cannabis With Caffeine

As more states are legalizing marijuana, researchers continue the discovery of its numerous side effects and interactions. Manufacturers of marijuana products are fast creating commonly used items mixed with CBD and THC as people search for convenient ways to consume cannabis. While the effects of combining cannabis and caffeine are largely unknown, some interesting evidence has been unveiled [1]. Read on to discover more about the potential benefits and side effects of consuming caffeine with cannabis.

Caffeinated drinks like tea and coffee act as a stimulant, and cannabis acts as either a stimulant or a depressant. Caffeine generally gives people energy, while most use cannabis because of its ability to provide relaxation. Given that fact, it may seem that using caffeine would cancel the effects of cannabis, such that marijuana may calm the coffee jitters. To date, more research is needed to provide more than just anecdotal evidence [1].

Eighty percent of the U.S. population uses caffeine for increased energy levels. As such, it is no surprise that the manufacturers of marijuana products are using it in things like edibles and oils. One Reddit user stated, “After years of smoking, I’ve found that caffeine and weed are a perfect mix. If I get nicely stoned then drink a strong cup of coffee, the effects mix so perfectly” [2]. Caffeine is a psychoactive drug that provides a feeling of euphoria. This is because caffeine blocks receptors for the neurotransmitter “adenosine,” which “blocks other neurotransmitters that excite the neurons; its activity thus leads to feelings of fatigue” [2]. Therefore, caffeine provides a feeling of alertness by blocking adenosine.

Marijuana also provides a feeling of euphoria with a release of dopamine in the brain. Many enjoy combining caffeine and marijuana because they feel it intensifies this euphoric feeling. Dr. Sergi Ferre, senior investigator at the National Institute on Drug Abuse (NIDA) told Live Science, “Caffeine increases tremendously the effects of a psychostimulant, including THC and cocaine, so any substance that releases dopamine, including THC, its effects are increased by caffeine” [2].

Published in the British Journal of Pharmacology in 2012, researchers studied the interaction between caffeine and cannabis on lab rats to determine how this combination affects cognitive function and memory. The results showed that “THC induced memory deficits when administered alone, and that these deficits were increased by combining THC with caffeine. It is thought that these surprising results are due to the way that caffeine interacts with adenosine receptors in the brain” [4].

In addition, it has been determined that combining caffeine and cannabis can have a negative effect on blood pressure since both substances can influence the cardiovascular system. The findings of a study conducted in 2011 show that when marijuana users stop using the drug, their blood pressure increased. Since caffeine is also known to increase blood pressure, it is possible that combining them magnifies this negative effect. If stopping the use of cannabis, users should consider reducing the amount of caffeine they consume, or stop using caffeine for awhile [4].

Whether medical marijuana will help your condition depends on many factors best evaluated by a medical doctor. If you feel you may benefit from medical marijuana, the first step is to take our eligibility survey. In just 5 minutes, you could pre-qualify for a Ohio medical marijuana recommendation. An Ohio Medical Marijuana Doctor can then determine if you qualify during an in-person exam. For more information, visit https://docmj.com/states/ohio-medical-marijuana-card/.