Is Cannabis an Effective Treatment Option for People with Down Syndrome? 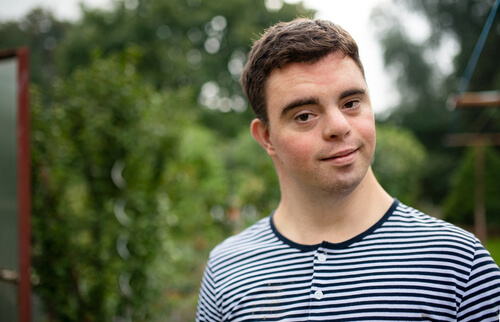 Down syndrome is an often discussed but largely misunderstood condition caused by a person having an extra copy of their twenty-third chromosome. It is the most common chromosomal disorder in the United States [1] and has only recently come to the forefront of public attention. People born with Down syndrome are also at higher risk of being born with heart defects and developing spinal problems. Because of these complications, people with Down syndrome are often in pain and taking other medications. With the legalization of medical marijuana, though, they may be able to get better treatment with less side effects.

What Causes Down Syndrome?

Down syndrome is caused by abnormal cell division. When the twenty first chromosome fails to separate during egg or sperm development, one of the gametes then contains an extra copy. This is why you may have also heard Down syndrome referred to as trisomy twenty one. There are other causes of Down syndrome as well, one cause happens when a part of the twenty first chromosome is spliced onto another chromosome, and the other happens when only some cells in the person’s body has an extra copy of chromosome twenty one, this last form is known as Mosaic Down syndrome. Babies born with Down syndrome often have physical and mental disabilities. This can include having an enlarged tongue, malformed airways, and abnormal patterns on fingertips.

Generally, both parents do not have extra copies of any other chromosomes or any other genetic abnormalities. There are, however, some factors that raise the risk of abnormal cell division occurring during meiosis, indirectly raising the risk of having a child with abnormal chromosomes. The most common risk factor is maternal age. Older mothers are at an increased risk of having children with Down syndrome. Despite Down syndrome not being passed down, it has been found that parents that have had a child with Down syndrome have a higher chance of having another child with the condition, though it is not fully understood why this happens.

People born with Down syndrome generally have near average life expectancy, something that has recently changed due to the influx of scientific and societal interest and acceptance. There are several complications, though, that people with Down syndrome commonly have. Infections and heart conditions are common, along with gastrointestinal issues and an increased risk of developing some neurological disorders later in life, such as Alzheimer’s and dementia.

What Can Medical Marijuana Do?

We have looked at how medical marijuana can help people with many different conditions in the past, and there is evidence that some of the complications that people with Down syndrome may develop can be helped as well.

The research regarding marijuana’s effect on people with Down syndrome is still sparse, likely due to the recency with which studies on marijuana as a whole have become accepted, but there are still some key findings worth discussing. First, it was found that the endocannabinoid system plays a larger role in the nervous system than previously thought, with cannabinoid receptors being upregulated in many different tissues associated with brain injury and disease. This has also been found to occur in the brains of people with Down syndrome, which produce specific plaques similar to those with Alzheimer’s [2]. The specific receptor produced by the tissue is easily activated by THC, and has been linked to modulating the activity of some immune cells and reducing inflammation and pain [3]. There have also been similar findings in animal studies on mice with Down syndrome, one of which showed that blocking cannabinoid receptors induced neurogenesis and improved memory in the mice [4].

Despite these findings, it is still unknown what role the endocannabinoid system plays in Down syndrome, or if it is a potential target for future therapy. For this reason, it is likely that the greatest benefit will come from using marijuana to fight some of the symptoms or complications commonly found in people with Down syndrome.

Down syndrome is a genetic condition caused by abnormal cell division of the parent gametes. Symptoms of Down syndrome include cognitive and physical problems, and is associated with several other complications. Medical marijuana can help patients with Down syndrome manage some of the effects of these complications, and there is some evidence of marijuana having a direct beneficial effect on the brain of Down syndrome patients, but the full effects of marijuana are still unknown. If you have any questions about medical marijuana, DocMJ can help find an affordable medical marijuana physician near you! We offer online bookings through our website and a super fast survey to inform you if you pre-qualify for a recommendation!