Is Marijuana Use Linked to Testicular Cancer in Men? 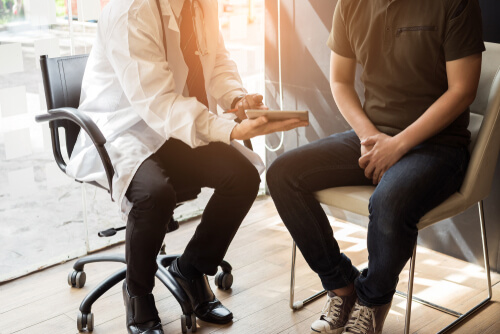 April is Testicular Cancer Awareness Month, making it a great time to consider the impact our habits can have on our health. While most people will think of medical marijuana as a potential treatment for cancer, others argue that using marijuana puts you at a greater risk of developing it, but which is true? If you’re curious about whether getting an Ohio medical marijuana card is right for you, be sure to complete our easy, online eligibility survey to find out instantly if you pre-qualify.

While the overall survivability is high, it is still very important to check regularly for any signs of testicular cancer development. These signs include a lump or dull ache in either testicle, one testical being significantly larger than the other, and feelings of heaviness in the abdomen, among others. If testicular cancer is not caught early, it may metastasize, or spread, to surrounding tissues, including the lymph nodes, the lungs, and even the brain.

Like many other forms of cancer, the cause is not yet clear, though there does seem to be some genetic and environmental risk factors that can raise the chance of it developing. Beyond self-checks for lumps, doctors may use ultrasounds, blood tests, or other techniques to diagnose a suspicious growth or lesion.

Treatment of testicular cancer ranges from surgery to remove the cancer, to radiation and chemotherapy to kill cancer cells. Sometimes, the entire testical may be removed in order to take out all cancerous cells, other times, nearby tissues may need to be removed as well. Radiation and chemotherapy target cancer cells specifically, without the need for surgery, but may reduce sperm counts and cause infertility.

Can Marijuana Cause Testicular Cancer?

The association between marijuana use and testicular cancer has not been heavily researched. That said, there has been a study published linking the use of marijuana and testicular germ cell cancers [2]. The paper, however, points out that there are many other potential factors that may have also influenced the rate of testicular cancer development that the researchers could not account for. The paper also states that, due to the nature of the study, the results may be biased, as the number of men studied was relatively small.

This finding, while interesting, is complicated. After all, there are multiple forms of testicular cancer, including seminomas and nonseminomas. These two forms have important characteristics, such as seminomas responding better to radiation therapy and chemotherapy, that can change the patient’s care plan. In the case of the above study, it was the nonseminoma germ cell cancer that was found to have an increased rate of incidence in marijuana smokers. The researchers were unable to find out why marijuana use was associated with a rise in cases of one form versus the other, though some, nonaffiliated, scientists point to the effects of marijuana on androgens and other hormones as possible suspects.

Does This Mean Marijuana Is Dangerous?

While it is worth considering, marijuana is still far from dangerous when used responsibly. No causal link has yet been identified and there are a large number of benefits to using medical marijuana. Every day, people use marijuana to do everything from reduce anxiety to fight epilepsy and even other forms of cancer [3]. However, it is important to acknowledge that there are risks and benefits to be weighed, and to speak with a certified physician if you are considering medical marijuana to discuss if it is right for you. If you need help finding an Ohio medical marijuana doctor near you, we can help! Speak with a Patient Care Coordinator today at (877) 899.3626 or by using the Live Chat feature on our website.

[3] Risks and Benefits of Marijuana Use