Is Medical Cannabis Safe for Patients With COPD? 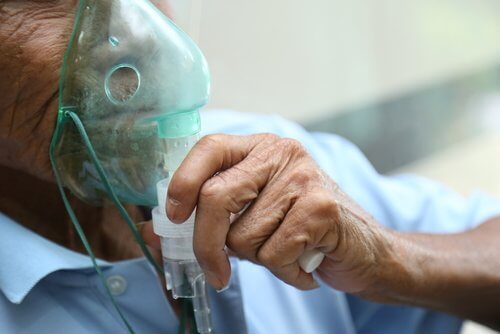 Chronic obstructive pulmonary disease (COPD) refers to a group of conditions that cause blockage to one’s airflow and breathing-related problems, including emphysema and chronic bronchitis. [1] COPD affects 16 million Americans, but millions of people suffer from it who have not been diagnosed with it yet. It makes breathing difficult, and although there is no cure for COPD, it can be treated.

COPD is a progressive disease, meaning it gets worse over time, making it difficult to breathe. Most times, it can be prevented. The leading cause of COPD is cigarette smoking, and while most people who have it smoke or used to smoke, up to twenty-five percent of people suffering from COPD have never smoked. Exposure to irritants such as dust, air pollution, and chemical fumes can also contribute to COPD.

Often, one does not experience symptoms of COPD until a significant amount of lung damage has occurred. Over time, the symptoms can worsen, especially if the person’s smoking habit continues.

Signs and symptoms can include:[2]

Those with COPD are likely to experience episodes where their symptoms are worse than their usual ones and persist for several days.

Compared to adults without COPD, those diagnosed with this disease are more likely to:

What does COPD do?

The bronchial tubes branch out into thousands of smaller, thinner tubes called bronchioles inside of your lungs. These tubes end in groups of tiny round air sacs called alveoli.[4] On the walls of the alveoli are small blood vessels called capillaries, which absorb oxygen into the bloodstream. Simultaneously, carbon dioxide gas is moved out of the veins into the alveoli.

When you have COPD, less air flows in and out of the airways due to one or more of the following reasons:

Although the risks of lung problems may be lower with marijuana smokers than those who smoke tobacco, studies have shown that inhaling cannabis smoke is not risk-free. [3]

According to The American Lung Association, the risk has to do with how marijuana is typically used, as it’s often smoked using pipes, bongs or joints. Inhaling any smoke is harmful to a person’s lung health, whether it is smoke from burning wood, tobacco, or marijuana.

Whenever these materials combust into smoke, toxins, irritants, and carcinogens are released. All of these can harm the lungs – even those who are only inhaling secondhand smoke.

While marijuana smokers may inhale less smoke per day than cigarette smokers, they typically inhale deeper and even hold in the smoke for longer, which can significantly increase the amount of tar that remains in the lungs. The American Thoracic Society reports that regular marijuana smoking is likely to result in lung damage, which potentially increases one’s risk of developing COPD. [5]

Another study done in 2013 showed that prolonged marijuana smoking injures the lungs’ airways’ cell linings, interfering with filtering out germs and dust.[6] Marijuana use can also make a weakened immune system more vulnerable to respiratory issues related to a fungus that grows on marijuana, called aspergillus, which may be inhaled when marijuana is smoked.

Those who smoke marijuana regularly report more symptoms associated with chronic bronchitis than those who do not smoke. In younger smokers, marijuana smoking has also been associated with the development of bullae.[7] If these air-filled sacs leak air, they can potentially lead to a collapsed lung.

Smoking marijuana may not be ideal for those suffering from COPD – but that does not mean you cannot find symptom relief using medical cannabis. In Florida, there are a variety of state-approved products that are dispensed under other non-smoking routes. Those routes are:

How to Qualify for a Florida Medical Marijuana Card

To qualify for your Florida Medical Marijuana Card, you must:

If you have been diagnosed with one of the above conditions and are looking for alternative ways of relief, book an appointment with one of our compassionate Florida Medical Marijuana Physicians.