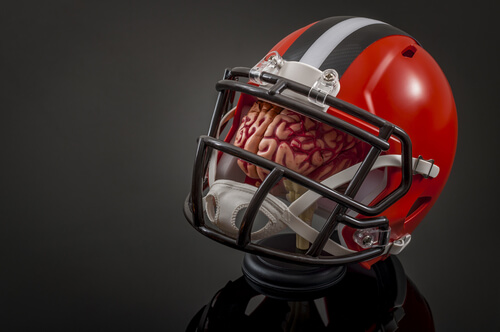 Over the past few years, medical marijuana has experienced a near complete turn-around in public opinion. What was once considered a purely dangerous substance is now being used across the country as a medical therapy and new research has shown multiple beneficial uses that in some cases contradict what was once considered common knowledge, one of which has to do with the brain. Some researchers have identified some of marijuana’s beneficial effects in neurons, which may have therapeutic value for some conditions, including Chronic Traumatic Encephalopathy (CTE). If you’ve been considering getting your Ohio medical marijuana card and have questions, please visit our FAQ page or call (877) 899.3626 to speak with a DocMJ Patient Care Coordinator!

You can find out instantly if you pre-qualify for a recommendation by completing our easy, online eligibility survey. Click HERE to take our survey now!

What is Chronic Traumatic Encephalopathy?

Chronic Traumatic Encephalopathy (CTE) is a degenerative disease that results in a wide range of symptoms. It being a degenerative disease means that it gets worse over time, often resulting in dementia and other cognitive problems. Recently, there has been a large uptick in awareness of CTE due to its prevalence in retired professional athletes. Originally, CTE was thought to only affect boxers, but it has since been diagnosed in other athletes, veterans, and other populations [1].

Unfortunately, while the “cause” of CTE has been identified, the “why” it happens is not totally understood. As it stands, researchers have identified repeated head trauma as the main factor in developing CTE, though there may still be several unknown variables that have not been identified. It is also worth noting that while repeated concussions or other head injuries are the cause of CTE, not everyone who experiences them goes on to develop the condition. CTE may also develop other neural problems, such as Parkinson’s or Alzheimer’s.

Recently, researchers have begun to look into possible genetic risk factors and their relationship with other variables, such as stress, age, and gender. For example, one paper suggested a possible epigenetic factor in the development of CTE, possibly linking an increased risk to substance abuse or the presence of performance enhancing drugs in the system [2][3]. Of course, the complexity of the neuropathology of CTE is enormous, and anyone who would like to learn more should speak with a medical professional.

Marijuana can have a variety of effects on the body, and you have probably already seen this. The psychological and physical benefits of medical marijuana have been well established. From raising mood to lessening chronic pain, many people are now familiar with the positive effects of marijuana, but many people do not yet know the neurological benefits of marijuana, and many more assume the dangers outway them, but this may not be the case.

To start, consider the reach of the endocannabinoid system itself. Cannabinoid receptors are found all over the brain and in regions that control everything from hunger to mood to memory. In fact, one study found that cannabinoids can produce the growth of new neurons in the hippocampus, a brain region responsible for memory management. The same study went on to describe antidepressant and anti-anxiety effects produced by the same chemicals [4].

Though hippocampal neurogenesis may not be directly related to CTE, it demonstrates the potential for hugely impactful treatments in the future. For now though, current research suggests that marijuana’s ability to fight oxidative stress may help CTE patients today. It was found that young male rats who had a traumatic brain injury and were treated with a cannabinoid agonist had significantly better learning and memory abilities than those not treated with the agonist [5].

As it turns out, this isn’t even a new discovery. A research paper from 1998 describes both CBD and THC as neuroprotective during ischemic episodes in the heart. In short, when heart tissue does not have an adequate supply of blood, it releases a large amount of chemicals that are toxic. But, the study found that CBD and THC were able to protect against those toxins even in neuronal cultures [6].

For users who are already diagnosed with CTE, while the neuroprotective effects of marijuana may help slow the progression of the disease, the damage has already been done. In this case, marijuana may work best as a way to reduce problematic symptoms, a use case that several high-profile athletes have voiced public support of. Calvin Johnson, a former NFL star, has even started a marijuana business because of his belief in these benefits.

Chronic Traumatic Encephalopathy is a very serious degenerative brain condition that is common in athletes and other people who have competed in high-impact activities. While the mechanisms behind CTE are not totally understood, there have been some genetic and environmental factors that may increase a person’s risk of developing the disease. Marijuana may help protect and heal the brain after brain injuries, and can help people with certain symptoms of CTE get them under control. If you, or someone you know, is looking for an affordable Ohio medical marijuana recommendation, DocMJ is here to help! You can speak with a Patient Care Coordinator over the phone at (877) 899.3626 or by using the Live Chat feature on our website.

Don’t forget to complete our eligibility survey to find out in just 5 minutes or less if you pre-qualify for a recommendation.