Can an Ohio Medical Marijuana Card Help Those Suffering From Thyroid Disorders? 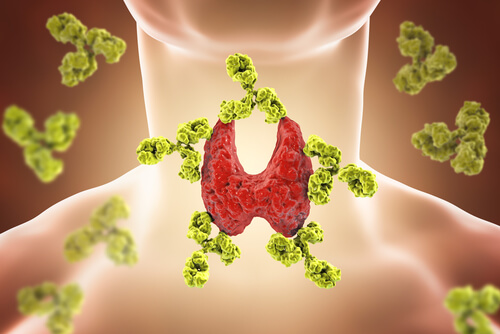 January is Thyroid Awareness Month, as some of you may know, and so we here at DocMJ would like to consider the impact that thyroid conditions can have on people and how medical marijuana can help those who have been diagnosed with one. If you are interested in medical marijuana and want to find a nearby certified medical marijuana physician, our website offers online bookings and a quick eligibility survey where you can find out instantly if you pre-qualify for a recommendation!

What is a Thyroid Disorder?

Thyroid disorders are exactly what they sound like, they are conditions that affect the thyroid gland. The thyroid gland itself is an endocrine gland that can be found around the middle of the neck. It has two connected lobes and is nestled right below the Adam’s apple. It secretes three main hormones into the bloodstream; triiodothyronine (T3), thyroxine (T4), and calcitonin, all of which have important functions in the body.

Interestingly, the thyroid gland can have quite a bit of variation from person to person. The size and shape can vary drastically, with up to an estimated fifty five percent of people having a third pyramidal lobe in between the two “standard” lobes [1]. Parathyroid glands, small glands found in pairs usually in each thyroid lobe, also vary in size, shape, and number, though these glands serve a separate purpose.

The hormones secreted by the thyroid gland are very important and have many functions, though they are most commonly linked to our metabolism. You may have heard someone say they have an under-active thyroid, resulting in them gaining weight or burning fewer calories. This is because thyroid hormones influence many aspects of digestion, glucose breakdown, and lipid catabolism.

Underactivity of the thyroid is usually called hypothyroidism, and can cause many symptoms. It is commonly caused by iodine deficiency as iodine is a key chemical in the production of thyroid hormones. People can also have overactive thyroids, resulting in weight loss, increased appetite, heart palpitations, and other nonspecific symptoms. The causes of hyperthyroidism vary, and can range from overactivity of the pituitary gland to Grave’s disease.

There are many more thyroid disorders, with many different causes. The thyroid, like many endocrine glands, is responsible for responding to and controlling a large number of other hormones and body processes. For many people with thyroid disorders, daily medication with pharmaceuticals is necessary, though this may not always be the case.

Medical Marijuana and the Thyroid

One study on the endocannabinoid system in rats found that cannabinoid receptors were direct modulators of thyroid hormone release and suggested that the system may have a more direct role on the thyroid than previously thought [3]. It has also been found that this relationship may work both ways, as a 2013 study found that rats with underactive thyroids responded differently to stimulation of the endocannabinoid system than when thyroid hormone was injected to supplement [4].

Despite these findings, studies on marijuana’s effect on the thyroid is scarce, so many users take medical marijuana to fight symptoms and side effects rather than the disorder itself. For example, Grave’s disease can often cause painful swelling, something that research has found marijuana to be a potent therapy for.

Medical marijuana may also help fight the anxiety and depression that is common in people with thyroid disorders. It has been found that problems with, or dysregulation of, the thyroid may be linked to certain other disorders, one of which being depression [5]. For this, high CBD strains may help users feel calmer, more relaxed and less anxious overall while also fighting feelings of depression.

In terms of working as a cure or treatment, medical marijuana will likely not work because of the many different causes of thyroid disorders. If a person has too little iodine in their system to make thyroid hormones will not fix the problem if they start to use medical marijuana. For people with thyroid problems caused by signalling hormone levels being too low or too high, it is also likely that, while marijuana can have an effect on hormone levels, the actual changes in most people’s bodies will likely not be large enough to change things one way or the other. This sentiment also holds true for problems with the thyroid itself, research indicates that the established treatments we already use will have more controllable and predictable effects. If you are looking to fight symptoms like fatigue and chronic pain however, medical marijuana offers potent effects with potentially less side effects and is definitely worth looking into.

A thyroid disorder happens when the thyroid doesn’t function as it is supposed to. This may be due to other organs not functioning correctly, low levels of the necessary chemicals to make it function, or some other physical cause. Medical marijuana can have strong effects on endocrine organs through the endocannabinoid system. People with thyroid disorders who use medical marijuana may find themselves with lower anxiety and depression levels, but it will likely not work as a direct treatment. If you, or someone you know, is looking for an affordable Ohio medical marijuana recommendation, the DocMJ team is here to help! Our website offers answers to frequently asked questions, more blog posts, and an eligibility survey which can tell you instantly if you pre-qualify for a recommendation!