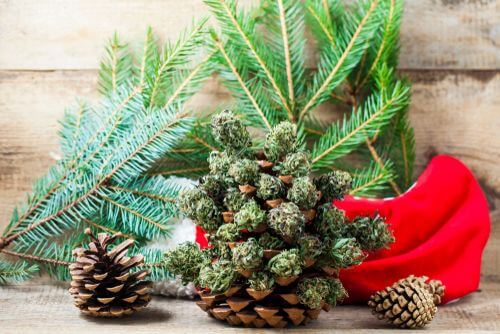 It’s official, the holiday season is upon us. Now that Halloween is behind us and daylight savings is over, people start looking forward to the end of the year. For many, this may be their first time with access to medical marijuana and may be curious as to how the two can work together. In this post, we will investigate pinene-rich strains of marijuana and why they may be perfect for the most wonderful time of the year.

To start, not everyone may know what pinene is, and that’s fine! Pinene is a specific terpene. Terpenes are a class of chemicals, like alcohols or aldehydes. There are many kinds of terpenes too, and they are responsible for many of your favorite smells produced by plants and animals. For example, the “citrus” smell of lemons or oranges is due to a terpene called limonene. Terpenes are produced for a variety of reasons including protection, as some less pleasant odors can turn away potential herbivores, or even attract predators of the herbivore. They have gone on to find uses in many industries, including biotechnology and medicine. They are used in pesticides, certain therapies, and have recently been pushed into the public eye due to marijuana legalization.

Terpenes are distinct from other compounds in marijuana, like cannabinoids, and generally do not act directly on the cannabinoid receptors in our body. This doesn’t mean that their only function is to smell nice though, as they can have a huge effect on the body either independently or in conjunction with other chemicals. By themselves, terpenes can help you do many things, including relax, fight inflammation, and even improve your memory. When taken in conjunction with the other compounds present in marijuana, though, the “entourage effect” can arise [1]. The entourage effect is so called because it happens when the different compounds in marijuana work together to enhance existing or even produce new effects. Therefore, you may have heard some advocacy for “full flower” or “full spectrum” marijuana versus the use of THC or CBD isolates.

The terpene we are interested in, pinene, is a well-studied terpene present not just in marijuana, but pine needles, rosemary, and even basil. Scientists have even started taking note of the chemical, with research increasing dramatically in just the last decade. There is evidence of pinene having antifungal and antibacterial properties [2]. In 2016, studies found that alpha pinene (the more common form) was able to enhance non-rapid eye movement sleep in mice [3]. NREM sleep is important because this is when the body starts to repair itself, leading some people to link pinene and physical recovery. Additionally, another 2016 study found evidence of antioxidant properties [4], so it is clear that pinene, even alone, can have profound healing properties.