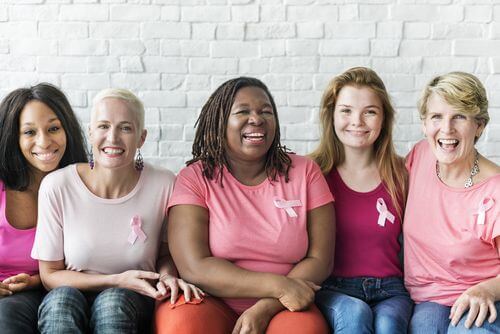 Breast cancer is the most common form of cancer in women worldwide with nearly two million cases diagnosed each year. Fortunately, with growing awareness and advances in medical science, many women can have full lives despite the disease.

Looking for an affordable Ohio medical marijuana recommendation? Visit DocMJ.com today and complete our eligibility survey to find out if you pre-qualify!

In the United States, there were about 250,000 new cases of breast cancer diagnosed in 2017 alone [1]. Of these women, those between the ages of seventy and seventy-four have the highest incidence. Caucasian and African American women were also found to have the highest counts per 100,000 compared to Asian, Hispanic, and Native women.

Breast cancer has also been found to occur in men, albeit at a much lower rate, with male breast cancer diagnoses being less than 1% of the total number of diagnosed. According to the American Cancer Society, about 2,620 men will be diagnosed in 2020 and 520 men will pass away because of it [2].

To start, cancer is one of the qualifying conditions in Ohio, meaning that if you are diagnosed and are considering medical marijuana as a possible avenue of treatment, you may be eligible for a recommendation. In fact, it is the fourth most common qualifying condition among medical marijuana users in Ohio according to the OMMCP [3]. In terms of how medical marijuana can be used to help those diagnosed with breast cancer, there has been a growing number of possible advantages, depending on both the individual and the severity of the diagnosis.

For people undergoing extensive chemotherapy, side effects of the treatment may include nausea and vomiting. This is quite common and has become known as chemotherapy-induced nausea and vomiting (CINV). Although pharmaceuticals have been able to largely control the vomiting portion of CINV, nausea has long been a difficult problem, with between forty and seventy percent of patients with CINV reporting nausea [4]. Luckily, CBD has been found to have effective anti-nausea properties thought to work by reducing excess serotonin release caused by chemotherapeutic agents and by exerting certain influences on the endocannabinoid system [5].

Medical marijuana can also help patients in many other ways, such as by decreasing their anxiety or elevating their mood overall. Unfortunately, many patients that receive a cancer diagnosis are more likely to develop depressive symptoms and have a hard time resuming a normal life. When used responsibly, medical marijuana may be able to help raise their spirits and reduce depression. It can also help fight chronic aches and pains that may develop in some patients.

Another exciting development is research regarding cannabinoids and tumor growth. To be clear, the general consensus currently is that marijuana will not “cure cancer”, but may act to decelerate tumor growth, making it a useful addition to already established anti-cancer therapy.

As you may already know, the body’s endocannabinoid system is extraordinarily complex and has a part in several crucial bodily processes including the immune response, memory formation, and digestion. Recently, some studies have found evidence of anti-tumor processes related to the endocannabinoid system. For example, one study has found that by adding CBD to an experimental form of cancer therapy (Gold Nanoparticles Photodynamic Therapy), side effects and overall cell toxicity will likely be reduced [6]. Another study found that several cannabinoids induce cancer cell apoptosis on their own [7].

Animal studies have also yielded exciting results. For example, one study has found that a specific marijuana derivative was able to significantly increase the odds of survival in mice with pancreatic cancer [8]. In vitro, it has also been found that THC may inhibit cell cycle progression in human breast cancer cells [9]. Again, however, research is continuing, and a complete understanding of all possible effects has not yet been reached.

Medical marijuana can help many people diagnosed with breast cancer increase their quality of life. In the future, cannabinoids may even become a common part of anti-cancer therapy and regimens. If you are looking for an affordable medical marijuana recommendation, the team here at DocMJ can help! Visit us online at DocMJ.com or call (877) 899.3626 to speak with a Patient Care Coordinator.