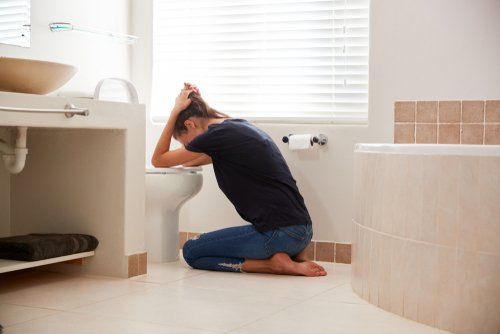 Medical marijuana has become a common treatment for those diagnosed with cancer and HIV/AIDS, among many other health conditions. Although some studies have shown that marijuana has anti-tumor properties, many patients use the plant to combat nausea caused by chemotherapy. Similar uses are common in patients with HIV/AIDS and other conditions. In this article we will focus on what nausea is and how medical marijuana can treat it.

If you live in Florida and are curious or have more questions about medical marijuana, our team is here to help! You can find a licensed Florida marijuana doctor near you by visiting us online. You can see if you pre-qualify for a Florida medical marijuana recommendation by filling out our online eligibility survey.

Nausea is commonly considered to be the feeling you get before you vomit, like seeing lightning strike before hearing thunder. Like thunder and lightning though, one does not always mean the other. In some cases, the uneasiness and queasy feeling of nausea can stay for hours without the person vomiting. Further complicating things, nausea can be brought on by many things, from physical causes such as pregnancy, food poisoning, and gastrointestinal problems, to mental ones, like anxiety and depression.

In cancer patients, chemotherapy induced nausea and vomiting (CINV) is one of the most well-known side effects of treatment. It is thought that the serotonin receptor 5-HT3 is a central part of CINV, and that chemotherapy causes serotonin to be released and bind to these receptors. A signal is then sent to the brain, which processes the information and sends another signal to the stomach, abs, and diaphragm, triggering vomiting [1].

Logically, then, if we could block the 5-HT3 receptor from its ligand then we could stop the feeling of nausea and vomiting. This turns out to be true! By giving cancer patients a 5-HT3 antagonist along with the corticosteroid dexamethasone (to relieve inflammation), acute vomiting was reduced by seventy percent [2]. However, this was less effective at controlling nausea, especially delayed nausea and anticipatory nausea common in chemotherapy. In fact, patients that were given 5-HT3 antagonists rated nausea as the number one most distressing side effect of chemotherapy [3].

Many anti-nausea drugs based on marijuana are already on the market [4]. One of the first of these was nabilone, which was produced to reduce nausea and vomiting during chemotherapy. Nabilone is a synthetic form of THC much like dronabinol, which is used to fight nausea and stimulate appetite. Studies comparing THC to other antiemetics found it to be comparable, and sometimes favorable, to other medications [5][6].

Another form of THC was also studied in pediatric cancer patients. The patients were given delta-8-THC drops prior to and following chemotherapy treatments for several months. In these cases, vomiting was completely prevented with the side effect being irritability in a small number of the children [7].

In 2007, a randomized study comparing dronabinol and ondansetron was published. The study compared both drugs alone and in combination with the other and a placebo. It found that dronabinol had comparable efficacy to ondansetron, and was much more effective compared to placebo, but less effective when the medicines were combined [8].

So, it seems as though marijuana is an effective treatment for nausea, but we haven’t seen yet the mechanism of action. Thanks to the discovery of, and recent research on, the endocannabinoid system, we have a suspect.

In the case of anticipatory nausea, cannabinoids may also help. When the anti-nausea drugs were given during the chemotherapy session, anticipatory nausea was reduced [13]. If the same drugs (5-HT blockers) were given after the patient was exposed to the cues that trigger nausea, they would be ineffective, because the response is conditioned. So, in the case of conditioned nausea, it is best to administer the drugs before nausea can occur.

Medical marijuana may be an effective tool for treating and preventing nausea. There is a suspected mechanism of action with a solid research backing, and many users are already experiencing positive results. Marijuana may be especially useful to those with repeated experiences with nausea, such as chemotherapy and HIV/AIDS patients. As always, please speak with a licensed marijuana physician about any concerns you may have before consuming medical marijuana in any form.