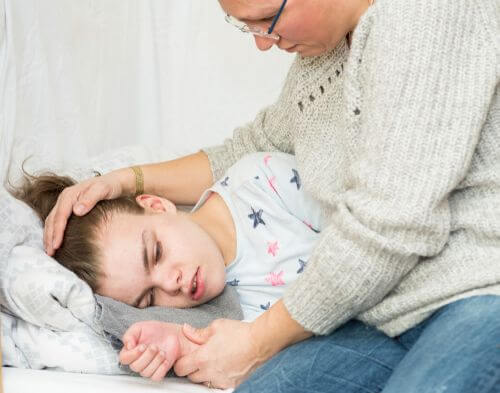 The recent influx of interest, both scientifically and social, in medical marijuana is in no small part due to the huge amount of people coming forward and describing their experiences with the drug. Both children and adults diagnosed with epilepsy have found relief when using marijuana and the state of Ohio has it listed as an eligible condition for medical marijuana. Societal acceptance of marijuana as an anticonvulsant is at an all time high as well, but is there a scientific backing to this? In this article we will go over what epilepsy is and how marijuana may be able to help those with it.

Epilepsy is a disorder involving the neurons in the brain. Abnormal neural activity causes recurring seizures with an unknown cause and no previously known medical condition. The seizures themselves can vary from nearly unnoticeable to vigorous. Epilepsy comes in many forms and can vary from person to person but can be categorized. The categories are: unknown cause, symptomatic, provoked, and cryptogenic.

The symptoms of seizures can change depending on the cause but can be anything from confusion and a sudden change in emotion to loss of consciousness and uncontrollable movement. The seizures can originate from one side or part of the brain (focal) or the entire brain (general). Generally, people diagnosed with epilepsy will have the same type of seizure every time, but other types of seizures or neurological problems can occur.

Everyone can develop epilepsy, regardless of ethnicity, gender, or age. While the cause remains largely unknown, several risk factors have been identified. Genetics and developmental factors are thought to play a role, with some specific genes having been found by researchers. Some people with a family history of epilepsy can also have a lower seizure threshold than normal. Certain brain injuries and conditions are also thought to increase risk. Children and older adults are also more likely to develop the condition, with dementia in older persons likely playing a role.

Epilepsy can also cause problems outside of the seizures themselves. Individuals with epilepsy are more likely to experience injuries and pregnancy problems and can develop emotional issues due to the conditions as well. Long lasting and uncontrolled seizures can cause brain damage and even death.

Can Medical Marijuana Benefit Those with Epilepsy?

The recent media attention and praise of medical marijuana has spurred a wave of legalization and research efforts. The most well-known story of medical marijuana is likely Charlotte Figi, a young girl diagnosed with Dravet Syndrome, a severe form of epilepsy. Using high concentrations of CBD, a cannabinoid produced in marijuana, Charlotte’s family reduced the frequency of her seizures from three hundred per week to only a couple per month.

More traditional pharmaceutical companies have also started researching marijuana, leading to some of the first true class one research. As of June 2018, the FDA has approved Epidiolex as a treatment for two forms of epilepsy, Dravet and Lennox-Gastaut. It was the first marijuana-derived drug to gain approval by the agency and opened the door for more derivatives.

The number of scientific studies on the anti-convulsant effects of marijuana has also been growing since the first in the 1970’s. In 2012, a study was published showing a significant decrease in induced seizures in rats treated with CBD [1]. CBD has also shown exciting uses in humans, including those with other neurological conditions like MS and Huntington’s [2]. CBD also lacks the psychoactivity of other cannabinoids, namely THC, helping its status as a medicine grow further.

Originally, the mechanism by which CBD reduced seizures was unknown, and hypothesized to be linked to the endocannabinoid system in the brain (more information on the endocannabinoid system can be found here). While the former is still true, the latter is likely false, as a 2010 study showed that CBD’s effects were likely not linked to the cannabinoid receptors [3]. This lines up with other studies showing that CBD can affect many different receptors, including dopamine and serotonin receptors.

Studies on epileptic patients themselves have yielded mostly positive results as well. In a study of 108 patients, using both CBD and clobazam was able to reduce the number of seizures in over thirty percent of the patients by more than half [4]. Ten percent of the patients reported they were seizure free when using both drugs. Other benefits were also reported, including increased alertness and improved verbal reactions. A similar study in young children with caregivers showed increases in memory, energy, social behavior, and overall quality of life [5].

While this is exciting, and more research should be done, it is worth noting that marijuana can also have unwanted side effects, especially in those with epilepsy. Marijuana high in THC can cause dizziness and fatigue, which can lead to more injuries in some people already more prone to them.

CBD may also interact with certain drugs when metabolized. Another study in those taking CBD and clobazam showed users feeling drowsier and more fatigued than normal [6]. This may be due to CBD increasing blood levels of the drug, which may be dangerous to some.

If you or someone you know suffers from epilepsy and would like more information on becoming an Ohio medical marijuana patient, call our office at (877) 899.3626 to speak with a Patient Care Coordinator.