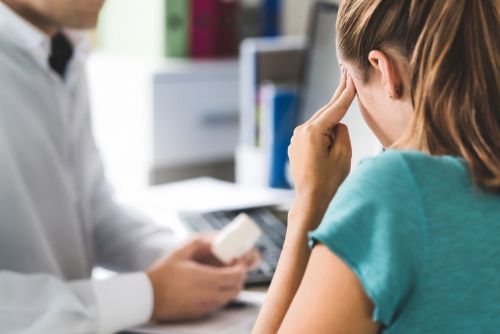 Studies are showing marijuana lessens or alleviates the pain and frequency of migraines. Taken in vape, pill, or liquid oil form, marijuana is becoming increasingly known for its effectiveness over the OTC migraine medicines [1]. In fact, patients who use medical marijuana report zero side effects when compared to those using OTC medications [2].

If you’re wondering if medical marijuana (MMJ) is right for you, schedule an exam with one of our Ohio Marijuana Doctors. Completing our online eligibility survey takes only 5 minutes or less. Find out if you pre-qualify for an Ohio medical marijuana recommendation today!

Migraines affect twelve percent of the population in varying frequencies and forms. Ibuprofen and Paracetamol are typically the most prescribed OTC medications for the treatment of pain from migraines. Sufferers commonly increase prescribed doses of OTC medicine when the first dosage fails to alleviate their pain. As a result, a secondary headache occurs, often termed a “medication overuse headache” [2]. It would seem ironic that a medication causes the very symptoms being treated!

One of the largest and best known clinical trials on the “Effects of Medical Marijuana on Migraine Headache Frequency in an Adult Population” came out of The American College of Clinical Pharmacy and was conducted in specialty clinics in Colorado. 121 adults were studied who had been diagnosed with migraine headaches and prescribed medications for their pain, to include medical marijuana, and who returned to their prescribing physician for a follow-up visit. The study measured the frequency of migraine occurrences, previous therapies tried, types and dosages of marijuana used, and the reported outcomes by patients.

After using marijuana, patients reported a decrease in the average number of migraines per month, from 10.4 headaches to 4.6 headaches per month! Most patients used marijuana daily in more than one form. Nearly half of the patients reported positive results, with 24 reporting a reduction or prevention of migraine headaches and 14 reporting they no longer experience migraine headaches! Only 4 patients had a negative report, such as those using edibles who felt unable to control the intensity or timing of the effects from marijuana. Inhaled forms of marijuana were reportedly most effective for acute pain. All-in-all, the study shows marijuana to be a viable treatment for migraines, though other studies are needed to look at the relationship between which strains, doses, and formulations work best [3].

A study published in The Journal of Headache and Pain surveyed 2,032 people to find out what illnesses they were treating with medical marijuana, their preferred strains and types, frequency and methods of use, as well as any prescription medications taken in conjunction with marijuana. A questionnaire about migraines was included in the survey to specifically determine migraine prevalence. Headaches were reported in the top 3 most prevalent illnesses experienced by 24 percent of those surveyed and 88 percent of that group used marijuana to treat their pain. Most gravitated toward Sativa strains of marijuana, with 41.2%-59.5% using cannabis as a substitute for prescription medications and 40.5%-72.8% as a substitute for opioids [4].

Below are excerpts from a testimonial by Michelle Tracy, dubbed “The Migraine Warrior,” shared via her blog of the same name:

“After my most recent neurologist told me that “there was nothing else that could be done for me” and that I’d “just have to learn to live with the pain” I put out a desperate cry for neurologist recommendations on Facebook. Not long after I began seeing Dr. McGeeney, I asked him about medical marijuana as a treatment for chronic migraine disease. We determined that I would be a good candidate for a medical card and he began the certification process with the state. In the meantime, I discussed this new avenue of treatment with my primary care physician, my psychiatrist, my therapist, and my family. None of them knew a lot about marijuana as a medical treatment and though they were all ultimately supportive, they initially had a lot of questions and concerns. As someone who rarely drank and never used recreational drugs, I was also unsure…I slowly began to learn about the three major categories of marijuana: Indica, Sativa, and Hybrid. I learned that, generally, Indica strains are known to sedate and relax you while Sativa strains are known to have a more uplifting feeling, making you feel more social and/or focused. The Hybrids, a blend of Indica and Sativa, tend to somewhat balance each other out…Dr. M suggested that I start out by vaping. Vaping involves heating the marijuana without burning it and inhaling the vapors. This is the quickest way to feel the effects of the marijuana while also being the quickest to wear off. This way, if I had any negative side effects, they would be short-lived…It took a bit of practice, but I soon got the hang of vaping. I’d typically only take 2-3 hits at a time but that was enough. It was, hands-down, the most effective anti-nausea medication I’d ever used. It lessened the excruciating neck and shoulder pain that accompanied my migraine attacks. It helped me sleep, calmed my restless legs, and lessened my anxiety and depression” [6].

White Widow: (Sativa-Dominant) Relaxes the body and eases muscle tension while having an uplifting effect.

Whether medical marijuana will help your condition depends on many factors best evaluated by a medical doctor. If you feel you may benefit from medical marijuana, the first step is to take our eligibility survey. In just 5 minutes, you could pre-qualify for a recommendation. An Ohio Marijuana Doctor can then determine if you qualify during an in-person exam. For more information, visit https://docmj.com/ohio/.