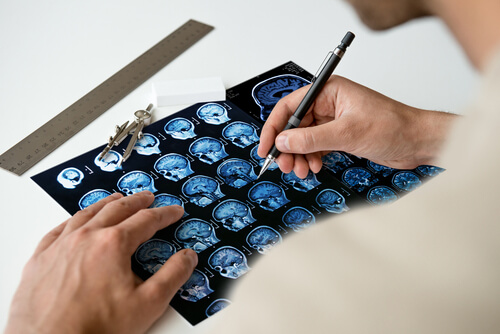 What is Multiple Sclerosis?

Multiple Sclerosis is a disease that affects the central nervous system. In people who suffer from MS, the body’s own cells attack nerves in a way that breaks down the myelin that surrounds them. This has huge implications. The myelin sheath that envelops sections of nerve cells helps the signals travel down the long axons and reach other parts of the body. For example, when you move your hand, an electrical signal moves from your brain, down your spine, through your arm, and eventually reaches the muscles in your hand. All of this happens incredibly quickly. One of the reasons it can happen so quickly is the myelin around the nerve cells. The electrical impulses (also known as “action potentials”) jump between the sections of myelin, increasing the speed at which they travel.

When the myelin is broken down, such as in people with MS, many things can happen. Motor function may be lessened and affected people may begin to experience muscle weakness or phantom sensations. Also, problems with vision such as blurring or even vision loss can occur. These symptoms can be permanent, but many people with MS follow what is known as a relapse-remitting course. This means that symptoms can develop quickly, but will fade or disappear over time, followed by a period of inactivity. Even people following a relapse-remitting course experience a general progression of symptoms over the long term. This gradual progression is known as secondary-progressive MS.

There is no known cause of MS, though risk factors have been identified. If a person has a family history of MS, they are more likely to develop disease, along with people with low vitamin D levels and those with certain autoimmune disorders. While why a person develops MS is still a mystery, most researchers and physicians believe it to be a combination of both genetics and environment.

Unfortunately, there is also no known treatment for MS, and most therapies are used to reduce symptoms or ease discomfort. Most commonly, corticosteroids are used to fight inflammation. There are also pharmaceuticals that have been developed to help reduce the rate of relapses and plasma exchanges may also be utilized.

Multiple Sclerosis is a very serious disease, and many people question the effects that marijuana has on our brain. While it is often seen as damaging, marijuana has actually been found to have numerous beneficial effects on our nervous systems. Relating to MS, one major one is its anti-inflammatory properties [1]. It has been found that inflammation of nerve cells is a key component of many neurodegenerative conditions, including MS, Alzheimers, and Parkinson’s [2]. By reducing neuroinflammation, and finding medicines that can fight this inflammation, many more pathways of treatment can be opened. However, while this is exciting, much more research is needed to determine the scope of marijuana’s anti-inflammatory capabilities and finding the right way to implement it into MS treatment.

In terms of symptom control, marijuana has a strong argument for its use. People with MS commonly suffer from secondary problems, such as chronic pain, fatigue, muscle spasms, and depression or anxiety. Nearly all of these have been found to be reduced after marijuana use in some people [3].

That is not to say that medical marijuana is without potential drawbacks. Finding the correct dose for an individual is important, as using marijuana too often or at too high a concentration can cause dizziness, anxiety, and potential behavioral changes. For people with an MS flare or late-stage secondary-progressive MS, these can be a real concern, and it is important to speak with a certified physician before its use.

MS is a neurodegenerative condition marked by damage to the myelin sheath that surrounds nerve cells. When the myelin is damaged, nerves can have trouble propagating the electrical signals that tell other parts of the body what to do. This results in many symptoms and can be difficult to diagnose. MS can often have flares with long periods of inactivity between them. Current research suggests that marijuana may be a candidate for future therapies to reduce neuroinflammation, and therefore potentially slow progression of MS. For now, it is best used to fight symptoms and increase a person’s quality of life. If you are interested in scheduling a Telemedicine visit with one of our Ohio medical marijuana doctors, you can book online at DocMJ.com or by calling (877) 899.3626. Be sure to complete our online pre-qualification exam to see instantly if you may qualify for a medical marijuana recommendation today!

[1] Cannabis sativa L. and Nonpsychoactive Cannabinoids: Their Chemistry and Role against Oxidative Stress, Inflammation, and Cancer

[2] Multiple Sclerosis and Neuroinflammation: The Overview of Current and Prospective Therapies

[3] Review of the neurological benefits of phytocannabinoids