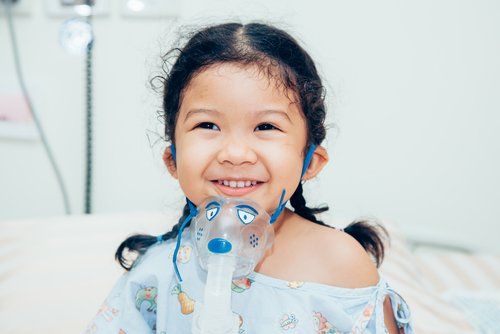 Medical Marijuana is becoming more and more common for treating a variety of ailments and symptoms. More and more parents turn to medical cannabis as an alternative way to manage the side effects of pediatric cancer and chemotherapy. These side effects can include nausea, lack of appetite, pain, and anxiety.

DocMJ offers a pediatric program for families looking for relief with medical marijuana. Our staff of trained Florida medical marijuana physicians and staff is here to help guide you throughout the entire process of helping your child feel better.

The Pharmacology of Marijuana

In order to help your child find relief with medical marijuana, it is crucial to understand why it works. In the early 1990s, two receptors were discovered: cannabinoid type 1 (CB1) and cannabinoid type 2 (CB2). [1] A person’s central nervous system (CNS) is full of endocannabinoids and cannabinoid receptors. Both CB1 and CB2 receptors are located presynaptically and control the release of neurotransmitters. CB1 is mostly responsible for psychological effects, while CB2 receptors may play an anti-inflammatory and immunosuppressive role.

Over the past two decades, there have been hundreds of studies that have investigated the antitumor properties of cannabinoids with promising results.

Multiple animal studies show that cannabinoids have antiproliferative effects in various tumor cell lines. These include breast, prostate, skin, neural, bone, lymphoma, leukemia, and thyroid cancers. Additionally, cannabinoids have been shown to enhance the effects of specific chemotherapeutic agents. While most reports are anecdotal of cancer “cures,” one case report of a 14-year-old Canadian with an overly aggressive form of leukemia successfully documented a dose-response to cannabis oil.

Radiation, chemotherapy, and bone marrow transplant were unsuccessful forms of treatment for the little girl, and her physicians decided there was no further treatment available. Not wanting to give up, the patient’s parents began giving her concentrated cannabis oil. After 15 days of dosing their daughter with cannabis oil, her leukemia cell count went from 194,000 to 61,000. By day 30, her cell count went down to 300.

Researchers have recently reported on the use of CBD in both in vitro and in vivo animal studies of neuroblastoma (NBL). NBL is an incredibly common form of childhood cancer that starts in early nerve cells (called neuroblasts) of the sympathetic nervous system to be found anywhere along this system.

Is Medical Marijuana safe for my child?

The answer to this question depends on whichever doctor you ask because there is a lack of complete, controlled clinical trials. But this is only because marijuana is still a Schedule 1 Substance under the federal Controlled Substance Act, which labels it as having no medical use, hindering the amount of research that can be done on it. There have been case studies done, and anecdotal evidence has been collected on pediatric conditions showing favorable results.

Most of the misconceptions about medical marijuana result from the negative stigma behind the word “marijuana.” Delta-9 Tetrahydrocannabinol (THC) causes psychoactive effects, but many other cannabinoids present in the cannabis plant do not cause psychoactivity. Some examples of these are cannabidiol (CBD), cannabigerol (CBG), and cannabinol (CBN). CBD is another cannabinoid that is gaining as much popularity as THC for its medicinal effects. It is effective in alleviating seizures, ADHD, anxiety, and cancer.

Cannabinoids have been studied for managing nausea and vomiting caused by cancer and cancer treatment. There are two FDA-approved cannabinoid drugs, Dronabinol and Nabilone, that treat nausea and vomiting caused by chemotherapy. Clinical trials have shown that both drugs work as well, and sometimes better than other medicines used to relieve the same symptoms. Nabiximols, a cannabis extract given via an oral spray, have also shown similar results.

There have also been studies that show cannabinoids’ ability to increase appetite in cancer patients. THC partially binds to and activates CB1 receptors. As a result, THC increases your appetite. In the different body tissues it occupies, CB1 acts in slightly different ways, several of which increase appetite. [2]

CB1 receptors can be found in the following areas: [2]

By activating CB1, THC can increase appetite through the following known mechanisms:

Oftentimes, cancer itself can cause pain. This pain can be caused by different factors, including the type of cancer, the stage it is in, other pre-existing health conditions, and pain tolerance. People who suffer from advanced cancer are more likely to have pain related issues.

Cancer treatments, surgerys, and tests can also be a cause of pain. There might also be pain that has nothing to do with cancer or its treatment. Like anyone, a cancer patient can get muscle strains, headaches, and other aches or pains.

Medical Marijuana has been used to treat pain because of how it interacts with CB1 and CB2 receptors. Chemicals that interact with CB receptors have been shown to cause antinociceptive and antihyperalgesic effects. This happens because they regulate neuronal and non–nervous system inflammation, decreasing pain.

At DocMJ, we recognize that families who are looking to relieve their children’s medical symptoms with marijuana have usually exhausted all other options. Medical treatments for pediatric cancer cost families not only a copious amount of money but also their time and energy as well. That is why we have done everything we can to ensure our pediatric patients and their families are well taken care of throughout the process of obtaining a medical marijuana recommendation for their child.

We have an assigned specialist on staff who handles all of our pediatric cases. They will walk you through the process of getting a second opinion letter, booking the appointment for your child, and answer any and every question you might have for the process. We also have a physician on staff in each region of the state who recommends medical cannabis to pediatric patients, so appointments are easily accessible for every family.

We also offer an excellent discount program for pediatric appointments. Each initial appointment costs $100 and every follow-up appointment after is $50. In addition to a discounted appointment, each of our pediatric patients will also be sent home with a DocMJ Bear to help them through difficult times.

Our team has also worked night and day to get the state’s Medical Marijuana Treatment Centers (MMTCs), or dispensaries, to help out pediatric families. So far, the following discounts are offered throughout Florida:

Cannabis treatment for children with cancer is still controversial; however, in cases of severe side effects from treatment and treatment-resistant cancer, medical marijuana should be a readily available option. It is way less toxic than most cancer treatments and can even enhance some chemotherapy effects while making the side effects tolerable.

If you are ready to take the next step in helping your child find relief from their cancer symptoms, book an appointment with one of our compassionate Florida Medical Marijuana Doctors. Let them help you find a regimen for your child that helps put a smile back on their face.