The Benefits & Risks of Vaping Marijuana in Ohio 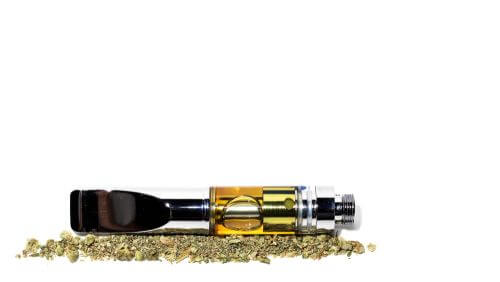 Today’s medical marijuana users have many more ways to consume marijuana than they did in the past. One method available for many Ohio marijuana patients is vaping, which involves heating up the flower without igniting it. This process gives the medical marijuana patient access to cannabinoids and terpenes while limiting exposure to potential carcinogens like benzene and carbon monoxide. Our Ohio Marijuana Doctors can help inform you on the benefits of vaping for your health conditions. To find out if you pre-qualify as a patient, take our 5-minute eligibility survey.

Most of us have heard of smoking marijuana using a joint, water pipe, or bong. These processes include lighting the flower to release the chemicals found in the trichomes, or sticky flower portions of the plant. Unfortunately, fire also causes contaminants to be released; these can affect your breathing and health. People with lung problems like chronic bronchitis, asthma, COPD, or lung cancer may not want to expose themselves to these chemicals. For them, vaping can be an attractive alternative as well as a way to benefit from using the whole plant.

Another factor to consider is one of stealth. As hard as you may try, using a traditional delivery device to smoke marijuana results in smells and clouds that advertise what you’re doing. If you smoke a joint, everyone around knows what you’re up to. The odor of burning marijuana is unmistakable. Vaping doesn’t cause large clouds of smoke and the odor won’t cling to your clothes. It’s the most discreet method of ingesting dry flower currently available.

Dry herb vaping uses heat to release the active chemicals in marijuana. By heating the plant to its optimal temperature without lighting it on fire, terpenes and cannabinoids are converted into a vapor; this vapor can be inhaled into the lungs like smoke from a joint or bong. The temperature used to release the vapor helps determine the taste, potency, and character (harsh vs. mellow, strong vs. mild) of the draw. While some terpenes are released at temperatures as low as 311°, CBD requires a temperature of 356° while the terpenes linalool and humulene need the flower to be heated to 388° in order to vaporize.

There are several different styles of dry herb vaporizers ranging from very simple and relatively inexpensive to complicated and costly. They all have benefits and drawbacks based on functionality, temperature achieved by the device, options for vaporization, cost, and portability. Your Ohio marijuana doctor can help you determine which one would be most effective for your needs.

Vape oil purchased at a dispensary most often comes in pre-filled cartridges. They are designed to be used with vape oil pens, which can be purchased at dispensaries along with the cartridges. Not all cartridges and pens are interchangeable, so if you use products from more than one dispensary you may need to have more than one delivery device. You can also find vape pens at the local smoke shop. These devices can range in price from $20 – $250 or more.

THC concentrate can also be vaped, though it requires a different delivery device because of the thickness of the product. Dab pens are used for vaping concentrates or wax. They contain a wick which draws the heated concentrate into a chamber where the vapor is released. They are not made to be used with vape oils, just like handheld vape pens are not created to handle the thicker consistency of a concentrate.

People who use dry herb vaporizers and vape oil devices often notice a distinct difference between the two products. There are valid reasons for this:

To make sure you’re getting a good vape oil, check the packaging and lab results for the product you’re interested in trying. Look for the use of native marijuana terpenes; the presence of CBD (this indicates a larger portion of the plant was used); a terpene content ranging from 5% – 20%; the presence of CBG, CBN, THCV, and other less common cannabinoids; a THC content between 50% – 70%; and a darker color to the oil. A higher THC content generally indicates a distillate, which has been purified so that most of the non-THC containing plant matter has been eliminated from the product. High-THC distillates no longer contain original terpenes or non-THC cannabinoids. Clear, light-colored vape oil means less of the original plant matter remains; you’re not going to get the same results you would with a darker product.

People who use vaporizers for cannabis are exposed to far less chemicals and toxins than those who smoke it, but there are still some valid health concerns to be considered.

If you feel you might benefit from vaping marijuana flower, speak to your Ohio Marijuana Doctor.