The Science Behind Marijuana Use & Red Eyes in Ohio 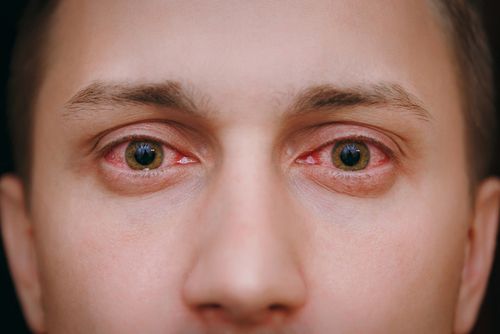 The Science Behind Marijuana Use & Red Eyes

Most who use cannabis, and even those who don’t, are familiar with the glossy stare, dilation, and redness it can cause to the eyes. Commonly thought to be caused by smoke from the burning plant, red eyes occur for the same reason that people experience dizziness – vasodilation. In this article we explain what causes vasodilation and possible ways to remedy it.1 Read on to learn more!

Effects on the Heart and Blood Vessels

When tested on animals, THC lowers blood pressure, yet humans experience the opposite effect. For those who are novice users, the effect is increased blood pressure. After repeated use, blood pressure decreases because THC relaxes the smooth muscle of the arteries, causing them to relax and increase their diameter. This is known as vasodilation. As blood flow is restricted, an increase in heart rate is triggered to compensate for the decreased blood pressure. In turn, the eyes become red because the blood vessels in the sclera (white of the eye) are dilated.2-4 Another explanation is that THC, one of many cannabinoids found in cannabis, interacts with cannabinoid receptors that are part of the endocannabinoid system of the body. The receptors are found throughout the body, most notably, in the eyes.1 For this reason, eye redness may occur regardless of how cannabis is consumed, be it smoking, vaping, or eating.4

Impacts to the cardiac system can be significant as the heart rate can increase as much as sixty percent over the normal resting rate. Fortunately, this presents little risk to those who are young and healthy, but it can be dangerous for those with poor family history regarding heart health. Those impacts can be greater in those who have experienced a heart attack or failure in the past. Another symptom commonly seen in users after they have consumed high doses of THC is called postural hypotension. This is when a person is unable to regulate their blood pressure when standing, whether from a seated position or from lying down. The blood pressure temporarily drops and can cause dizziness or fainting.2

Some patients will experience red, or bloodshot eyes every time they use cannabis. For others who are less sensitive, the symptom may show at times and not at others depending on their genetics and the dosage and quality of the product they consume.3-4 While it is not the smoke from cannabis, but the cannabinoids that cause eye redness, the smoke may still cause redness in those who are allergic or easily irritated by smoke.3 This is true but for a small percentage of people whose immune system interacts negatively with the chemicals found in cannabis. It is easy to tell the difference between eye redness caused by cannabinoids from eye redness caused by an allergy. A person who is allergic to cannabis will usually also experience symptoms such as dry skin, hives, itchiness, runny nose, sore throat, or nasal congestion.4 Those who are allergic to the smoke from cannabis generally also experience the same effect after having been exposed to the smoke from tobacco or even incense.3

How Can I Prevent Red Eyes from Happening?

Using eye drops is the most common and practical way to prevent red eyes from occurring. Along with providing lubrication for the eyes, they contain chemicals like tetrahydrozoline hydrochloride and potassium chloride. These chemical compounds help restrict the blood vessels in the eye, making them less noticeable.

Another way to mitigate red eye is to choose cannabis strains with a higher CBD content and a lower THC content. This is because CBD does not cause vasodilation.

Eye redness is not as common for regular users of cannabis. While not as ideal or feasible for some, using cannabis, or THC, on a regular basis can help build a tolerance to its vasodilating effects.5

How THC Benefits the Eyes

As mentioned, the endocannabinoid system is a cellular communication network that interacts with the cannabinoids found in cannabis. The human eye contains very high levels of cannabinoid receptors, namely the CB1, which are used by the brain to process vision. A 2016 study on primates, as published in Neural Plasticity, found that cannabinoids can be manipulated to change how electroretinographic waves interact with the retina. To come to this conclusion, researchers used an electroretinogram to measure the effects of light on the eyes. They found cannabis receptors were responsible for managing how the eyes respond to light. While these findings require more research, this study provides promise into the potential for cannabis as treatment for many eye diseases such as glaucoma, neurodegenerative blindness, and diabetic retinopathy. Another benefit cannabis brings to the eyes is enhanced night vision. As cannabis engages cannabinoid receptors in the eyes, vision becomes clearer in lower lighting conditions. Researchers have studied this aspect of cannabis for three decades. For example, a pharmacologist during the 1990’s, M.E. West witnessed fishermen in Jamaica who had an “uncanny ability to see in the dark” after consuming a cannabis elixir.6

Whether medical marijuana is right for you depends on many factors. Our caring staff of Ohio Medical Marijuana Doctors is ready to evaluate your condition. If you feel you have a condition that is treatable with medical marijuana, the first step is to take our eligibility survey. In just 5 minutes, you could pre-qualify for a Ohio medical marijuana recommendation. An Ohio Medical Marijuana Doctor will then determine if you qualify during an in-person exam. For more information, visit https://docmj.com/states/ohio-medical-marijuana-card/.