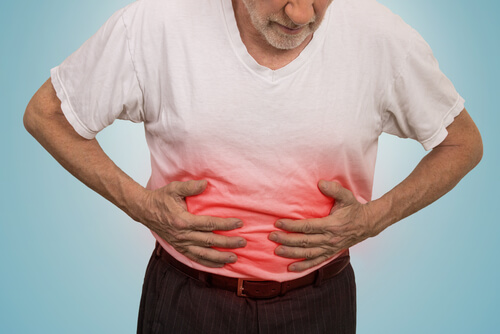 Irritable bowel syndrome (IBS) affects up to 45 million people in the United States, some of whom are coping with a severe form known as Crohn’s disease. IBS can cause a host of symptoms such as constipation, diarrhea, bloating, and abdominal pain. It has a significant worldwide prevalence, affecting up to 10–15% of adults. [1]  Although IBS is not associated with an increased risk for life-threatening illness, it is associated with significant health care and economic burden.

There have been multiple studies published demonstrating the potential benefits of using medical marijuana for IBS. If you are a Florida resident who is suffering from irritable bowel syndrome, or any similar condition, you may qualify for a Florida Medical Marijuana Card. This survey will quickly assess you and let you know if you are eligible for a recommendation from a Florida Medical Marijuana Physician.

A considerable amount of anecdotal evidence suggests that certain strains of cannabis have provided consumers with some temporary relief from their IBS symptoms. The strains that work best at alleviating IBS symptoms are ones that contain a CBD content that is at least equal to or higher than its THC level.

The following are strains that Florida Medical Cannabis patients can use to get relief from their IBS symptoms:

Available at: The Flowery

In order to be able to legally purchase any of the above products, you must qualify per a medical marijuana physician’s recommendation and be approved by the state of Florida’s Office of Medical Marijuana Use.

The Journal of Molecular Medicine published a study in 2005 that indicated the body’s endocannabinoid system (ECS) may have beneficial properties for guy tissue. The ECS controls how cannabis interacts with the body while also maintaining overall balance or homeostasis.

All vertebrates and humans have an ECS and it is distributed amongst the organs and tissues. CB1 is mostly expressed in neurons of the central, peripheral, and enteric nervous systems, while CB2 is found mainly in immune cells.

The ECS consists of endogenous cannabinoids, the receptors on which they act, and the enzymes involved in their biosynthesis and degradation. [2]  The two primary endocannabinoids are anandamide and 2-AG. These are synthesized internally and bind to presynaptic receptors known as cannabinoid 1 and 2 receptors (CB1 and CB2).

Anandamide acts as a partial agonist of CB1 and CB2, with a slight preference to CB2, while 2-AG binds to both receptors equally well with greater potency. [2]  2-AG is found in higher concentrations in the gastrointestinal tract, meaning the gut is a key player in the endocannabinoid system.

In the gastrointestinal system, CB1 and CB2 are found in all layers of intestinal sections, Numerous mouse studies have shown a relationship between the ECS, intact gastrointestinal physiology, and regulation of gut inflammation. Overall, endocannabinoids acting on CB2 will calm any inflammatory response.

The cannabis plant produces phytocannabinoids, like THC and CBD. These plant chemicals act via similar pathways as the endocannabinoids do making them a great supplement for those receptors. The relationship between the gut and the ECS help facilitate the “brain-gut” phenomenon because of the surplus of receptors in both the brain and the GI tract.

Irritable bowel syndrome is generally a long-term or recurrent disorder of GI functioning. It typically involves the large intestine (colon) and small intestine with disturbances of gut motor function and sensation.

These gut-related activities are regulated by the brain, which could also be impaired. This is often called a brain-gut disorder. These disturbances can produce symptoms of abdominal discomfort, pain, bloating, and a change in bowel habits.

Only a small portion of people with IBS have severe signs and symptoms. Most people can control their symptoms by managing diet, lifestyle, and stress. More severe symptoms can be managed with prescription medication, counseling, and even medical marijuana.

There is a range of symptoms associated with IBS. Abdominal pain is the key symptom of irritable bowel syndrome (IBS) and is also associated with a change in bowel habits, like diarrhea and/or constipation.  The pain is often relieved by having a bowel movement and can at times be worsened after eating.

Symptoms can change over time and there can be periods when symptoms flare up as well as periods of remission when they diminish or disappear.

Other common symptoms of IBS include:[3]

In order to diagnose irritable bowel syndrome, procedures can include:

The precise cause of irritable bowel syndrome is not know, but some factors that appear to play a role include:

Cannabis has shown effectiveness in managing stress, issues with the nervous system, inflammation in the gut, and muscle contractions. It is also a great pain reliever and is being studied for its antibacterial properties making it a great option for those with IBS looking for alternative relief.

If you are curious to see how medical marijuana could help manage your IBS symptoms, book a risk-free appointment with one of our many qualified Florida Medical Marijuana Doctors. If you do not qualify per state guidelines, you will be issued a full refund.