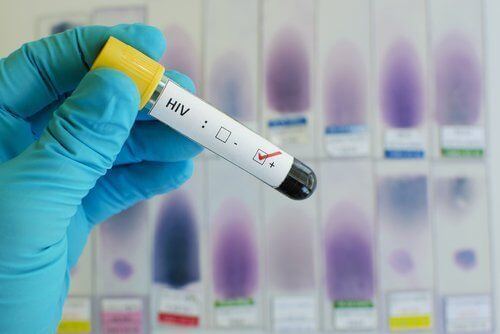 HIV is short for Human Immunodeficiency Virus. It is a virus that latches onto the body’s T cells, which are important immune cells that help fight off infections. By using the T cells’ internal structures, HIV can replicate itself and spread through the body.

The first stage of HIV infection is marked by high virus counts and those infected with the virus may feel flu-like symptoms but may not feel sick at all. The second phase of the infection is called “clinical latency”. In this phase, HIV numbers are low, and the person may not present any symptoms of infection for a decade or longer. At the end of the phase, HIV begins reproducing rapidly again, and T cell numbers start to drop. This begins the transition to acquired immunodeficiency syndrome, or AIDS. Due to their compromised immune systems, those with AIDS can get sick from pathogens that normally would not be able to infect the body. These are called opportunistic infections and can be deadly for those living with AIDS.

For more information on HIV/AIDS, you can visit the CDC website.

How Can Medical Marijuana Help Those With HIV/AIDS?

The endocannabinoid system has widespread effects on the body, including the immune system, so it makes sense that cannabis may be able to help those with a disease like HIV.  Marijuana has been shown to have effects on specific immune cells as well and has shown promise in helping those with auto-immune diseases.

However, medical marijuana as a means of treatment for HIV/AIDS specifically has little scientific backing at the time of writing. One study done specifically in Florida showed that there was no statistically significant change in virus levels between those who consumed marijuana and those who did not [1]. The study does not mention cannabinoid levels of the marijuana consumed, though, and may influence the result. For example, another study done in Los Angeles did show a significant drop in viral numbers [2]. It is evident that more research is required on the subject, as specific mechanisms have yet to be identified.

Most of the use of medical marijuana for those with HIV/AIDS lies in its ability to reduce the symptoms of the virus. A reported 24% of surveyed Americans with HIV used marijuana in the previous three months, nearly five times the national average of those without HIV [3]. The majority of these users are seeking relief from the common side effects of HIV/AIDS, such as lack of appetite and insomnia.

While marijuana has and is used as a sleep aid by many, it is important to know the risks of using it as such. Users may become dependent on the drug to fall asleep, and experience insomnia when not ingesting cannabis. A recent study has also suggested that cannabis may actually worsen sleep in those with HIV [4]. The study has stated that more research is needed on the effect of cannabis on sleep for those with HIV, though, as the number of studies on the subject is low.

Wasting syndrome is another difficult symptom of AIDS, where the person loses over ten percent of their body weight due to the disease. Medical marijuana has been shown to be useful for combating wasting syndrome in those with HIV/AIDS. Smoking medical marijuana both increases weight gain and the number of times the user ate in a day [5].

Overall, medical marijuana may be able to help those living with HIV/AIDS find relief, but it cannot cure the virus. It is important that HIV/AIDS patients speak with a licensed medical professional before using a new drug or undergoing a new form of treatment. If you would like to know more about becoming a Florida medical marijuana patient, call our office at (888) 908.0143 to speak with a Patient Care Coordinator.