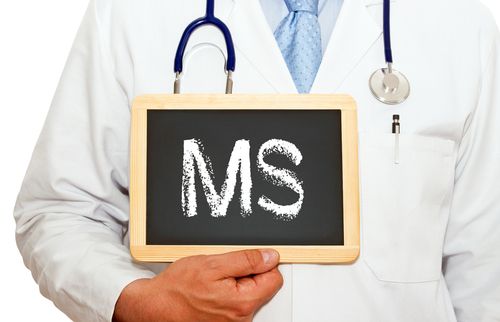 Multiple Sclerosis, also referred to as MS, is an autoimmune disease that causes impairment to various nerves in the body. There are 4 types of MS that range from relapsing to remissive stages, and stages that progressively worsen without remission. The symptoms of MS can vary from person to person, and the degree of severity can range from mild to debilitating. The most commonly experienced symptoms of MS are fatigue, vision problems, pain, numbness, muscle weakness, bladder and cognitive issues. The list of MS symptoms is extensive due to the disease affecting different and numerous areas in the nervous system. Other primary symptoms include stiffness, balance problems, tremors and other involuntary movements, anxiety, dizziness, depression, and sleep disturbances. Those with MS can experience any of those symptoms, and when these symptoms become exasperated it is referred to as an MS “flare up.”

There is no known cause for MS, however, there are circumstances that can bring about an MS flare up. A flare up occurs when the central nervous system becomes inflamed. A flare up can be recognized by the onset of new or worsening symptoms. Some influences that can cause inflammation to occur are stress, lack of sleep, diet, extreme temperatures, and infections. It’s important for those who suffer from MS to recognize their personal triggers and how to manage their symptoms, especially during a flare up.

It is recommended for those that suffer from MS to manage their symptoms through various means. Some find relief from eating a diet that fights inflammation or taking vitamins that can reduce inflammation. Others can find relief through different exercises that help reduce stress and spasticity, such as yoga, tai chi, or water aerobics. Many with MS have also reported that including medical marijuana into their daily routine can reduce or alleviate MS symptoms, and aid in diminishing the occurrence and length of flare ups. One of the most beneficial reasons for using cannabis is the plants anti-inflammatory properties. THC is one of the primary compounds in the cannabis plant and has been linked to suppressing inflammatory responses within the bodies endocannabinoid system. Cannabinoids also suppress the body’s inflammatory response that helps stop the death of cells and aids in regulating the immune system.

Many with MS experience pain and stiffness that can include specific areas of the body, to the extent of impacting the entire body. The National Center of Biotechnology Information (NCBI) stated in one study that the use of Cannabinoids improved symptoms associated with autoimmune diseases. It goes on to include that Cannabinoids specifically improved MS symptoms such as pain, stiffness, tremors and involuntary movements due to their immunosuppressive and neuroprotective properties.

Two of the most commonly experienced symptoms of MS is fatigue and sleep issues. Both have serious implications on the body and mental health. Fatigue can be described as an overwhelming feeling of exhaustion, to the extent of having a difficult time with simple tasks like moving or even speaking. Like other MS symptoms, fatigue is worsened by sleep issues. Many people with MS have difficulty falling and staying asleep due to the amount of pain and stiffness caused by MS. There are many strains of medical marijuana that can help those with fatigue during the day, and aid in sleep at night. Marijuana strains that help to produce energy are usually classified as Sativa strains. Energizing strains that can help with fatigue are Harlequin, Chocolope, Sour Diesel, and Blue Dream to name a few. For night time use, Indica strains are characterized to help with the aid in sleep and relaxation. Common Indica strains for sleep include Skywalker, God’s Gift, Grandaddy Purple and Kosher Kush. Due to cannabis reducing pain, stiffness and tremors, studies found that those with MS in general also experienced better sleep while using cannabis.

Along with the physiological symptoms of MS, medical marijuana can also assist with the emotional and psychological symptoms that can be experienced with MS. Medical marijuana’s two main cannabidiols, THC and CBD have both been found to alleviate feelings of depression and anxiety. In a study published by NCBI, Cannabidiol, or CBD was found to enhance serotonin levels immediately upon the first dose of CBD. Due to how quickly the effects of CBD are, and how long-lasting the effects remained, CBD also demonstrated similar effects to that of antidepressants. CBD can perform as an antianxiety and antidepressant due to it stimulating the 5-HT1A receptor in the brain responsible for decreasing blood pressure, aggression, heart rate, impulsivity as well as prolonging REM sleep and increasing sex drive.

Another symptom that can be experienced with MS are tremors and Myoclonus involuntary movements. These movements can include shaking, jerking motions, spasms, and even seizures. These movements can be exacerbated by stress, sleep depravity and depression. The use of medical marijuana can be beneficial in the treatment of unwanted movements. As mentioned above, the use of CBD helps facilitate the function of the 5-HT1A receptor to reduce anxiety and depression. Numerous studies have also concluded with anecdotal evidence that cannabinoids specifically have a therapeutic effect on MS related tremors and movements.