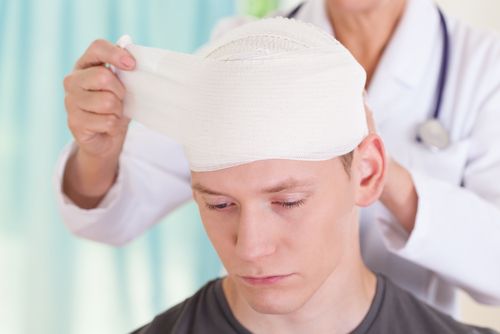 Traumatic brain injuries are very common occurrences in the United States. In fact, the CDC estimates 2.5 million emergency visits related to TBI in 2014 alone. To make things worse, the brain is extremely complex, so many different symptoms can present themselves depending on the type and severity of the injury. Recently, however, physicians and patients have begun to use medical marijuana to help alleviate many of the issues caused by TBI. In this post we will look at what TBI is and the science behind the claims that medical marijuana can help people with TBI.

If you have suffered a TBI, find out if you pre-qualify for an Ohio medical marijuana recommendation in just 5 minutes or less by completing our online eligibility survey. Our Patient Care Coordinators are available to answer any questions you may have Monday-Friday, 9:00 AM-5:00 PM. Speak with a DocMJ Patient Care Coordinator today at (877) 899.3626 or email us at ohio@docmj.com.

What is Traumatic Brain Injury (TBI)

TBI is an injury that generally results from hard bumps, blows, or penetrating injuries to the head. These injuries cause abnormal functioning of the brain, resulting in many different possible problems. The most common cause of TBI is a motor vehicle accident, with the second most common cause being falls. Together, these causes make up nearly seventy five percent of all TBI-related hospitalizations. Risk is generally higher in young children and older adults with the highest rate of hospitalizations among people 75 years and older.

Because of the complexity of the brain, there are many symptoms of TBI that may present themselves. In less severe cases, people may lose consciousness, feel dizzy, nauseous, have a headache, or feel out of focus. In more severe cases, there may be a prolonged loss of consciousness, seizures, speech problems, and even mood and behavioral changes. These symptoms may be long lasting or show up long after the initial injury.

Research further suggests repeated and severe TBI can result in degenerative diseases, such as Alzheimer’s, Parkinson’s, and dementia. More information can be found on the Mayo Clinic website and the CDC website. The CDC also provides informational materials via Heads Up, which aims to educate readers on the different facets of brain injury.

While brain injuries and marijuana may not seem like a beneficial pairing, researchers have begun looking into possible protective effects brought on by marijuana. There have been studies showing marijuana having sweeping effects on the nervous system, so it may not be a huge jump after all.

In the realm of symptom relief, marijuana has been used to reduce pain for a very long time, and we’ve seen some studies prove this [1][2]. Specifically to TBI patients, headaches and migraines are a common occurrence. Marijuana has been shown to successfully reduce pain caused by several types of headaches and migraines [3]. Cannabinoids have also been used to fight inflammation, which may provide further relief to some TBI patients [4].

Some other symptoms of TBI may be helped by medical marijuana. Marijuana can help reduce seizures [5], fight nausea [6], and attenuate other problems related to TBI. In the cases of degenerative diseases possibly caused by previous TBI, marijuana may also help. Marijuana may increase the quality of life of those with Parkinson’s [7], Alzheimer’s, and dementia [8].

Cell death immediately follows TBI and can last for months afterward. Needless to say, this is bad. However, animal studies have shown marijuana slowing this cell death. Two studies in mice found that cannabinoid receptor agonists slowed both blood-brain barrier and neural cell degradation [10][11]. TBI can also produce toxic shock, which can have an effect on the blood-brain barrier, producing hypotension. Other studies have shown marijuana reducing tis as well [12].

Endocannabinoids also have protective effects against edema after brain injuries [13] and animal studies suggest that activation of a cannabinoid receptor is crucial to this positive effect [14]. These effects can also help protect against secondary injury caused by TBI, reducing the severity of symptoms later.

In a study following four hundred and forty-six adult patients who had TBI, it was found that those who tested positive for THC had a statistically significant reduction in mortality rates [15]. One proposed hypothesis for this relies on the slightly opposite effects of THC at lower doses. The slightly damaging effect of the low dose THC protects against the hugely damaging TBI by a sort of “pre-conditioning” [16]. There are fewer studies on the effects of CBD on TBI, though, but it does show some promise [17].

It is important to also discuss potential drawbacks. For example, the main cannabinoid researched particularly for treatment of TBI was called HU211. In trials, HU211 showed some short-term benefits, but did not show any benefits in the long-term [18][19]. The usual side-effects of marijuana use must also be considered, especially in an already at-risk population. Marijuana can lower reflexes and cause mental and behavioral changes, increasing the risk of injury. Some researchers also point out a possible increase in the risk of developing psychosis in adolescents with TBI [20].

Research specifically linking benefits for those with TBI and marijuana are scarce, but there is promising evidence that it may be the case. Many studies show marijuana as having neuroprotective properties and some even show this following TBI. Research on long-term effects is also lacking and is desperately needed. It is important for physicians considering recommending marijuana to patients with TBI to weigh each case individually.