What Exactly is Cannabinoid Hyperemesis Syndrome? 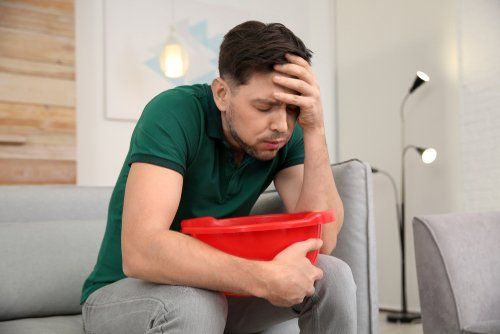 Medical marijuana is used to treat a variety of disorders. One of its main benefits is the low incidence of side effects. Of the known negative effects, Cannabinoid Hyperemesis Syndrome, or CHS, is the most significant. It currently has just one guaranteed treatment: to stop using marijuana. At this point, it is believed to only affect people who are long-term heavy users under the age of 50, so most medical marijuana patients should not be at risk of experiencing CHS. If you think medical marijuana might help you, take our 5-minute eligibility survey to see if you pre-qualify. At your initial appointment, you can speak with a Florida medical marijuana doctor to determine what routes and products will be best for you.

Marijuana often has an antiemetic effect on the body; in fact, it is used by cancer patients to help control or eliminate nausea and vomiting caused by chemotherapy and radiation treatments. However, for a small number of long-term marijuana users, a paradoxical reaction (one opposite of what is expected) occurs. The first published research on this condition occurred in Australia. Several patients presented at hospital emergency rooms with what had originally been thought to be Cyclical Vomiting Syndrome or CVS; these particular patients were discovered to be long-term heavy marijuana users. Though their symptoms were similar to a patient with CVS, there was one notable difference: when they stopped using marijuana, the symptoms stopped as well.

A major obstacle to diagnosing Cannabinoid Hyperemesis Syndrome is the failure of patients to report marijuana use. In addition, since it is used to treat nausea and vomiting, many patients experiencing CHS may not associate their marijuana use with these symptoms. Patients coming to the ER with CHS may be subjected to an extensive battery of tests including a pregnancy test; a variety of blood tests; X-rays; gastric studies; checking for adequate kidney, liver and gallbladder function; ruling out ulcers or intestinal obstruction; and making sure there isn’t any sign of intestinal bleeding or digestive tract cancer. Sharing the duration, amount, and frequency of marijuana use with an ER physician can make a big difference in both diagnosis and treatment.

It has been suggested that chronic marijuana use leads to an increased amount of THC being stored in fat cells; when a certain level is reached, the ability to mediate the vomiting reflex is overridden and hyperemesis occurs. Marijuana decreases nausea and vomiting by acting on the central nervous system (CNS); however, it can also cause vomiting by slowing the rate at which the stomach empties, leading to an excess of stomach contents and gastric acid. Another theory is that over time the accumulation of THC has an effect on the hypothalamus, causing an interruption in the digestive process as well as the body’s ability to regulate temperature (possibly explaining the overwhelming urge to take hot showers or baths as a way to regain a balanced temperature throughout the body). People prone to developing Cyclical Vomiting Syndrome could be more susceptible to Cannabinoid Hyperemesis Syndrome. There may be a link between certain strains of marijuana and CHS. It could also be the result of toxins, pesticides, or other substances on the plant itself. Concentrates, often made from stems, leaves, and other leftover parts of the marijuana plant, may contain up to 10 times the pesticides found on buds; this could be a contributing factor. Only time and research will help identify if these factors are contributory or if there is an altogether different basis for CHS.

CHS does not respond to the same treatment as Cyclical Vomiting Syndrome. Medications such as Zofran and Reglan have little effect on nausea and vomiting. Pain medications offer no relief. Until the marijuana clears the patient’s system, the most effective ways to help are supportive ones.

As a Schedule I narcotic, scientists and researchers in the United States have been unable to do large-scale legal research on marijuana; this includes not only its benefits and advantages, but possible side effects. Available information is either obtained from other countries where marijuana is legal or from statistics gained through data collected by doctors, emergency rooms, drug treatment programs, and patient reports. Further research on CHS depends on the ability of researchers to study how it affects those suffering with this disorder.