Why Can I Only Vaporize, Not Smoke, My Medical Marijuana in Ohio? 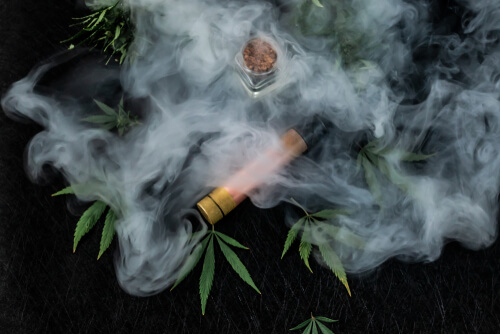 Ohio patients new to the medical marijuana program may not realize that it is only legal to vaporize, not smoke, their cannabis. The state of Ohio has ruled that the process of combustion creates compounds that can cause lung irritation, making smoking cannabis via a joint or bong a respiratory risk.

The Ohio Medical Marijuana Control Program allows dispensaries to carry cannabis flower for patients to purchase, but the flower in dispensaries is only to be sold for vaporization. The devices Ohioans may use to vaporize their medical marijuana appear on this state-approved list.

Is Smoking Cannabis As Harmful As Cigarettes?

Like tobacco smoke, marijuana smoke can irritate your throat and can cause a heavy coughing, which can be hard on your lungs. Cannabis also contains volatile chemicals and tar that are similar to tobacco smoke, raising concerns about risks for cancer and lung disease.

Smoking marijuana may also reduce the respiratory system’s immune response, increasing the likelihood of the person acquiring respiratory infections. However, animal and human studies have not found that marijuana increases risk for emphysema.

Marijuana smoke contains carcinogenic combustion products, including about 50 percent more benzopyrene and 75 percent more benzanthracene (and more phenols, vinyl chlorides, nitrosamines, reactive oxygen species) than cigarette smoke does. Because of how it is typically smoked, cannabis smoke can produce up to four times the amount of tar compared to cigarette smoking.

One study suggested that it’s impossible to make precise comparisons between the damage to one’s health caused by smoking cannabis versus the damage caused by smoking tobacco. The study also noted that an estimated 70 percent of marijuana smokers also smoke tobacco, making it difficult to conduct any meaningful studies that isolate the effects of cannabis smoking.

Oftentimes, tobacco smokers come to accept that coughing and shortness of breath are part of the price they pay for the risks of smoking. The fear of developing cancer can often persuade cigarette smokers to quit. Whether cannabis users should be similarly concerned about cancer remains unproven.

A few small, uncontrolled studies have suggested that heavy, regular cannabis smoking could increase risk for respiratory cancers. However, larger, well-designed population studies have failed to find any increased risk of lung cancer associated with cannabis use.

Why Are Vaporizers Thought To Be Safer?

Vaporizers are thought to be safer than smoking because they don’t combust the cannabis to heat it. Vaporizers use a variety of methods to heat your flower or concentrated cannabis flower without burning it. The process of vaporization atomizes the cannabinoids in your cannabis into a vapor format that can be inhaled without the carcinogens, tar, and other byproducts of combustion ash.

In August 2019, an uptick in emergency room visits revealed that vitamin E acetate, a thickening additive in some THC-containing vaping products such as e-cigarettes, produced use-associated lung injuries. Available evidence suggests that the substance is added as an inexpensive diluent or “cutting agent” to cannabis oil preparations in e-cigarette, or vaping, products. Most reported vaporizing injuries and hospitalizations are the result of illicit products purchased outside of state dispensaries, where Vitamin E acetate is banned. However, some questions remain as to the safety of vaporizing cannabis, regardless of whether it’s black market or state-tested.

Other Choices For Administering Medical Cannabis

Smoking your cannabis in a bowl, bong, or rolling a joint is illegal in Ohio. But many patients cite that they don’t feel entirely confident with the safety record of vaporizers.

Instead of vaporizing your cannabis, you might consider administering it in some other way like a tincture, edible, topical, capsule, or beverage. Many patients, especially those who live in public housing or rental units, may feel the need to use methods that conceal the smell of cannabis. Because it remains an illegal substance at the federal level, landlords may lawfully evict you for using cannabis.

If you’re a medical marijuana patient in a rental situation, you may consider that forms like tinctures or capsules may draw less attention to your cannabis use than vaporizing or smoking it would. However, if you own your own home, you might feel you can exercise the freedom to use your cannabis however you want.

If you’d like more advice about using your cannabis legally in Ohio, reach out to one of our trusted DocMJ physicians today.