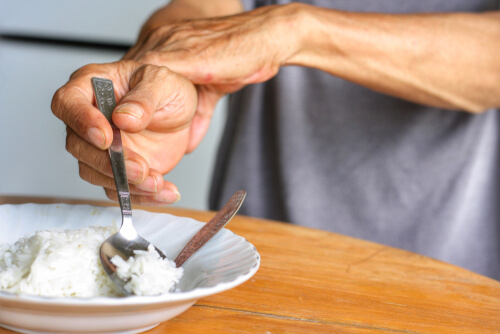 Parkinson’s disease is a degenerative disorder that affects the central nervous system. Composed of the brain and spinal cord, the central nervous system integrates and coordinates all of the parts of our body. When Parkinson’s develops, cells in a part of the brain called the substantia nigra die, leading to tremors and muscle rigidity, making many activities extremely difficult.

Parkinson’s generally has a late-life onset, with most people being affected being older than sixty years old. As the disease develops, symptoms will get worse, and treatments generally lose effectiveness. Treatments are also generally more focused on reducing symptoms, as there is no cure for Parkinson’s yet. Scientists believe the condition is caused by a mix of genetics and external factors. While the reason for the neural cell death is well understood, research has linked the presence of specific chemicals and plaques that develop in some people’s brains.

How Marijuana Affects The Brain

Marijuana has been found to have a number of effects on the brain. Many people are already aware of its effects on memory and cognition, but may be surprised to find out how deep it actually goes. Some may be familiar with the name Charlotte Figi, who, as an infant, suffered from debilitating seizures before being treated with CBD [1]. This is largely thought to be one of the first highly publicized successful treatments using marijuana. Current research suggests CBD is able to reduce or eliminate seizures by interacting with the endocannabinoid system and altering GABA levels [2].

The ability for cannabinoids produced by marijuana to interact with many different kinds of receptors is not completely unique, but it is important. For example, CBD has been found to also interact with the 5-HT1A receptor [3]. This receptor is categorized as a serotonin receptor, which is an extremely important neurotransmitter and is found across the brain in many brain regions, including the basal ganglia, which itself is associated with controlling voluntary movement, cognition, and eye movement. The 5-HT1A receptor is also a target for antidepressants, including SSRIs.

How Marijuana Can Help

There is a growing body of evidence that suggests marijuana may be an effective treatment for Parkinson’s disease, exactly because of the benefits listed above. It is also especially important to consider the secondary benefits that can come from successfully managing symptoms, including improvements to mental health and overall quality of life.

According to studies on patients with Parkinson’s, it was found that there was significant improvement to pain and motor symptoms in almost all users [6]. The same study also points out that there was a noted improvement in sleep and no significant adverse effects. These results were repeated in another, similar study two years later [7].

Parkinson’s disease is a serious, neurodegenerative condition caused by cell death in the brain. It has been found that the endocannabinoid system may play a role in Parkinson’s disease but the mechanism of effect is not yet fully understood. Marijuana may be able to greatly impact the lives of Parkinson’s patients at any stage of the illness due to its neuroprotective, anti-anxiolytic, and antispasmodic properties. If you are interested in booking an appointment with a nearby medical marijuana doctor, you may do so through the DocMJ Ohio homepage. We also offer a quick survey where you can find out if you pre-qualify for a medical marijuana recommendation instantly!

[3] Cannabidiol: Pharmacology and potential therapeutic role in epilepsy and other neuropsychiatric disorders